You may be looking for the 2015 version.

Zero X (short for Zero Altitude Launch Space Exploration Craft) was the designation given to a solar system exploration spaceship that appeared in the movie Thunderbirds Are Go. It comprises five components, all possessing their own flight capabilities.

Plans drawn up for the craft received approval in 2060, following which construction began on Zero X as well as a number of necessary facilities at Glenn Field to accomodate its manufacture and launch.

Initially, one Zero-X spaceship was built - but it was accidentally sabotaged by The Hood (who'd earlier snuck aboard to take photographs), when he got his foot stuck in the trim hydraulic. This jammed the control system and Zero-X crash-dived into the sea and exploded. The five-man crew managed to eject to a safe ocean-landing in the craft's emergency-escape capsule (see below).

The second Zero-X, identical sister-ship of the first, succeeded in reaching Mars - but its landing module (or MEV), damaged by mysterious Rock Snakes on the Martian surface, subsequently managed a successful escape to space, where it docked with the rest of the ship and then headed for Earth...

After suffering a crucial circuit failure - when one of its massive Lifting Bodies failed to dock properly - during the re-entry through Earth's atmosphere, the now-crippled Zero-X required the help of International Rescue; and IR did indeed manage to save the crew. But Zero-X itself was beyond saving - and was ultimately destroyed when it crashed and exploded on impact, in the evacuated town of Craigsville.

The rear of the craft during take-off. All 5 landing gears seen here belong to Lifting Body 2

Both Lifting Bodies are virtually identical. The only major difference is the fact that Lifting Body 1's wingtips can fold down 90° to support the Zero X's aeroframe during takeoff - Lifting Body 2's cannot (and do not need to). Lifting Body 1 is attached on top of the spaceship just behind the MEV roof, while Lifting Body 2 is attached underneath the main engine section at the very rear of the ship.

Prior to launch, Zero X is fitted with a nose cone. Cahelium-bonded with ceramic additives, it is detachable and provides a heat-resistant shield during take-off and re-entry into Earth’s atmosphere. Computerised control systems allow the nose cone to be remotely controlled from Zero X of Glenn Field

After detaching from the craft in the upper atmosphere, the nose cone - with the aid of two jet engines, both of which provide thrust - makes its way back down to Earth in a controlled descent and land using its undercarriage. Upon Zero X’s return to Earth, the nose cone - utilising its jet engines - takes off to rendezvous with (and reconnect to) the spaceship.

Additionally the nose cone is equipped with external environment recorders and docking clamps.

Raised to front of MEV

In the absence of ejector seats as such, the MEV instead incorporates an emergency escape capsule, which is buoyant. This is used by the crew to make a hasty escape in the event of an emergency.

The capsule is also fitted with an altimeter, the presence of which proved to be crucial following a jam in the first Zero X’s control system, in that it allowed Paul Travers to know how close the craft was to the sea, and further enabled him to make a logical decision as to what the ideal altitude to eject at was.

After ejecting, the escape capsule - with the aid of a parachute - is brought back down to Earth in a safe, controlled descent.

During the launch sequence of Zero X, the crew go through the capsule’s doors (one at the rear, one at the front) before they reach their respective stations in the MEV.

Crew aboard the Escape Capsule

On its mission to Mars, the Zero-X had a crew of three, accompanied by two scientists.

Assembly of the Zero X is the responsibility of Commander Casey in Assembly control.

To date, no fewer than four cross-sections of Zero X exist. At least two of these were illustrated by Graham Bleathman; one featured in Supermarionation Cross-sections, and the other appeared in the 2017 Captain Scarlet Spectrum Agents' Manual.

As for the other two, one is believed to have been produced by Bleathman for a Captain Scarlet comic in the 1990s.

Lifting bodies 1 & 2 linking up to Zero-X 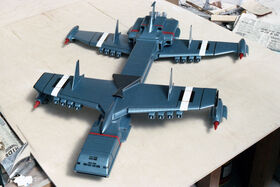 Zero X model used in the movie, during construction 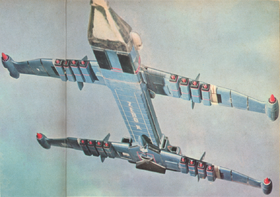 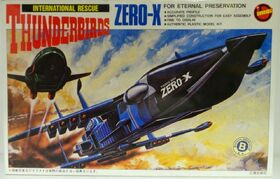 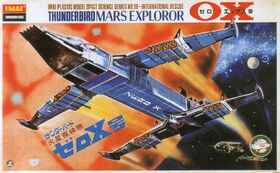