"You haven't seen anything yet!"

He appears in the episode The Duchess Assignment. 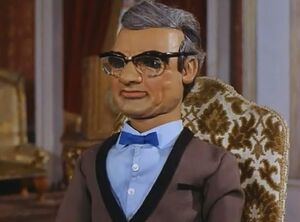 A Visit from Jeff Tracy...

While Jeff is visiting England to take in the London air display, Lady Penelope takes him to an art gallery featuring an exhibit of 20th Century art. As they view the Braquasso painting Portrait of a Gazelle - owned by Penelope's friend Deborah, the Duchess of Royston - she tells Jeff of Deborah's current financial straits. This sparks an idea, and as Jeff tells Penelope, "There's someone in New York I've just got to go and see..."

That "someone" is Wilbur Dandridge, head of Gazelle Automations; and Jeff arranges an appointment to see him. The meeting between these two longtime friends takes place at Dandridge's incredible all-automated office. Wilbur, it turns out, is crazy about gazelles; he falls in love with the picture of the Duchess' painting, and declares he simply must have it. Jeff advises Penelope of Dandridge's interest in buying the painting...

"Where have you been all these years?" 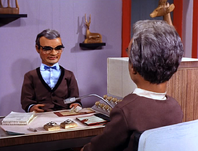 Jeff tells Dandridge about the painting

...and a Trip to Creighton-Ward Manor

Dandridge travels to England, where Lady Penelope has invited him to her home for a meeting with the Duchess so that they can discuss a sale. Deborah states that she will not sell at any price. She does, however, agree to a rental arrangement, and insists that she transport the painting to New York herself... 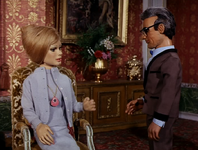 An arrangement is made

Later on, having returned to New York, Wilbur is advised by his secretary, Miss Godolphin, that a man representing the Duchess of Royston has arrived to see him. Dandridge, though, smells a rat - such a "middleman" was never part of the arrangement - and he advises her to alert the police, and then send their visitor up to his office. The Duchess' "representative" is really a crook called Chandler, and when he meets Wilbur face-to-face, he demands the rental money still owed. Dandridge asks to see the painting, and Chandler obliges. But then, Wilbur pulls a gun on him, and a struggle ensues - the gun goes off, and the painting is ruined!

I smell a rat! 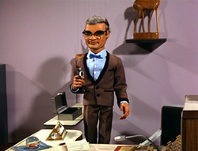 A Trip to the Hospital

Wilbur and Deborah meet again at the hospital, where the Duchess has been taken after she was saved from kidnappers by "those romantic young men from International Rescue." Remorseful, he reveals the unhappy fate of the Braquasso painting, But she is unconcerned, for good reason: her kidnappers stole only a copy of her painting, while the original, rolled up inside her umbrella, never left her side the whole time!

As the partygoer
Community content is available under CC-BY-SA unless otherwise noted.
Advertisement