Thunderbirds Wiki
Register
Don't have an account?
Sign In
Advertisement
in: Articles Under Construction, Classic Thunderbirds, Thunderbird 6,
and 2 more

"Whistle Stop Inn" is under construction
Please feel free to add anything that you think might improve this page, and be aware that content might be missing or change suddenly at any time.

The Whistle Stop Inn is a railway themed restaurant in Switzerland that appeared in the Thunderbird 6 movie.

The restaurant is quite unique in that it actually uses a model railway layout with model steam locomotives and rolling stock to bring the food from the kitchen to the tables rather than waiters. Alan and Tin-Tin were both quite impressed with the set-up. Also, it has a replica of a steam locomotive in the center of the dining room.

Altogether, there were 32 diners inside the restaurant. In terms of the number of puppets, it is the biggest crowd scene ever filmed in Supermarionation.

Other appearances (Isn't that...?) 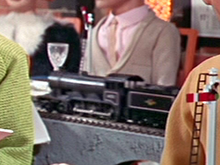 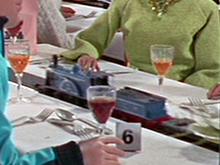