"Volcano!" is the 14th episode of Thunderbirds Are Go! season 2. It was aired on both TV screens and select VUE cinemas on September 30, which is known as Thunderbirds day.

Dr Quentin Questa has inaccurately predicted the eruption of a volcano for the last decade. This time, however, he invokes a special science code of honour that brings Brains out to his location. Brains discovers that Questa is right: the volcano is gonna blow!

Brains: "T-Thanks for the lift, Scott."
Scott: "Not a problem. Ah, the detour should only add a few seconds to the flight."
Brains: "A f-few seconds? But by my calculations, it takes Thunderbird 1 at least 12.3 seconds to land."
Scott: "Who said anything about landing?"
Brains: "Oh no..."

Brains: "M-MAX, why are you playing that music?"

Concierge: "How may I assist you?"
Virgil: "Hi, I'm from International Rescue."
Concierge: "Yeah, and I'm Jeff Tracy."
(Virgil clears his throat and points out the window at Thunderbird 2.)
Concierge: "Oh, my." 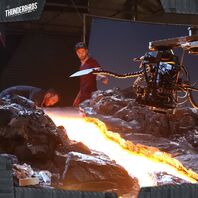 A behind the scenes look at the episode's lava rig 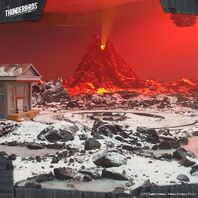