"Time for some heavy lifting!"

Virgil Tracy is a character from the Thunderbirds Are Go! television series. He is the pilot of Thunderbird 2, and is dubbed 'The Peacemaker' of International Rescue. He is the second eldest of Jeff Tracy's sons and is the Second eldest brother of the family, as well as the adoptive brother of Kayo and the second grandson of Grandma Tracy.

Virgil’s signature colour for his iR uniform is green.

"At first glance, Virgil is imposing to look at, but he is in actual fact the most sensitive member of the Tracy Family. Virgil is the strongest of the Tracy brothers and is more often engaged in physical combat and is more than capable when it comes to engineering tasks and equipment. A gifted musician and artist (though he wouldn't want you to know that), he is calm, level-headed, and the voice of reason during a rescue mission."

Virgil is the second eldest of the five Tracy brothers (Grandma Tourismo) and is the pilot with the biggest people and equipment mover in the series - Thunderbird 2. Virgil is the largest of his brothers in terms of physical size, but he also has the heart to match it, devoted to his family and his job.

He is the most level headed and thorough of the boys, always planning ahead to avoid as much danger as possible (Recharge) even if Scott or Gordon are along for the rescue and have a tendency to go against the plans he has laid out. He is usually calm in demeanor when focusing on the job at hand, however that doesn’t mean he isn’t quick to get frustrated when things don’t go his way (Unplugged, Breakdown) and is fast to pull pranks on his siblings (Falling Skies) but can also have a tendency to get his feathers ruffled by younger brother Gordon (Bolt From the Blue) who is his most common passenger. He's very compassionate to his brothers feelings - like when Scott admitted that things could get too much for him (Recharge) and can sometimes be a little dismissive - when John was worried about losing contact with Alan and Kayo (Slingshot).

When it comes to his use of the various pod machinery, Virgil is mostly the one to call upon as he flies the heavy carrier class Thunderbird with all the parts required to assemble pods on the fly, but if the stronger craft is required to do another task or needs to stay airborne, he usually drops Gordon into the thick of it and keeps a close eye on his sibling while he moves on to assist elsewhere. The only disadvantage to flying the big craft is that it can become a sitting target in the skies and there has been more than one occasion where Virgil has had the entire craft electrified and taken out of his control (Skyhook, Bolt From the Blue) and even has had to safely crash land back on Tracy Island with the engines ablaze (Earthbreaker). Virgil is very attached to his craft and hates the idea of her being harmed or suffering damage, as was shown when Thunderbird 2 was badly scorched during an operation in London (Inferno).

Virgil has a very unique Exo-suit called the ‘Jaws Of Life’ which he relies quite heavily on in most rescues where a great deal of heavy lifting is required or the need for extra mobility and it has got him out of a few precarious situations - mostly from dangerous drops from great heights (Ring of Fire Part 1, Unplugged, Breakdown, Bolt From the Blue). It was shown on one occasion that Virgil is a bit too reliant on his tech to save the day, to the extent where he considered himself useless without it, but is capable of making do if required.

In his down time when he’s not giving his big ‘bird’ a good round of maintenance, Virgil loves to play the piano and is often seen in front of the keys filling the house with music (Chain Of Command, Up from the Depths Part 1), as well as painting (Inferno, Flame Out).

Since Virgil is the pilot of 'The Big Bird', he usually has the equipment needed to perform a large majority of rescues.

Virgil and Grandma Tracy are meeting up with Lady Penelope in London when a EMF generator cuts the power out to the entire city and anything over it (including Thunderbird 2). With the help of Grandma Tracy, they both track down the source of the power disruption and put a stop to it.

It's Virgil's birthday and he's been sent out on a solo rescue to an ice shelf to investigate a breakdown, only to find that it's deep in the ice. After having a run in with Doctor Gergory Peck, he learns that they were down there trying to find something that would aid in a cure for his daughter's illness and offers to aid him.

"One of the hazards of being a member of the world's most elite rescue team. Life doesn't stop just because it's your birthday."

When a power station in the Arctic circle starts to overload, Virgil and Scott are sent out to try and prevent it from becoming a disaster. While MAX happens to be the one who saves the day, Virgil does get to have a serious talk with Scott about his recklessness and offers his brother some compassion and a reminder that he is only human. 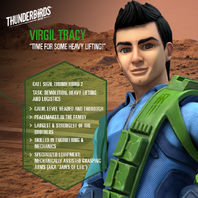 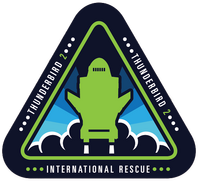