The U.S.N. Sentinel is a United States Navy strike vessel that has a top speed of at least two hundred knots. It was featured in Terror in New York City.

Currently undergoing sea trials prior to being approved for active service by the World Government Security Council, the Sentinel is the fastest battleship. It will be spearheading the newly-formed World Navy's fleet of surface vessels, although it was originally designed as a multi-purpose strike vessel to provide rapid response capability in global hot-spots. Gas turbines served by an atomic generator supply the Sentinel with its power. It can remain at sea for eighteen months without maintenance.

Armaments include Lynx missiles and forward and amidships mounted artillery cannons (4.5 inch). A complement of four VTOL strike aircraft developed from the Arrowhead WASP interceptors can be launched from forward mounted catapult ramps, and additional support vehicles include two helijets and a range of tactical deployment drones.

Other sections include the stern-positioned bridge, flight control, an operations centre, an Electronic Warfare control room, and a communications centre.

Below decks include an engineering deck, hangars for both tactical deployment drones and U.S. Navy combat aircraft.

It is infamous for being the ship that accidentally shot down Thunderbird 2, putting it out of action for a couple of weeks. Having detected Thunderbird 2 passing overhead while they were conducting secret tests, they incorrectly identified the ship as an enemy aircraft and tried to shoot it down, its first four missiles damaging Thunderbird 2's tail-fin and engines before the craft was identified.

When the Empire State Building in New York collapsed after an attempt to move it two hundred yards, it left Ned Cook and his cameraman Joe trapped in an underground river. At Jeff Tracy's request, the U.S.N. Sentinel then transported Thunderbird 4 to New York so it could be used in the attempt to save the two men, Sentinel being the only vehicle remotely fast enough to have any chance of getting Thunderbird 4 to the danger zone in the available time frame. Although it still took two hours for Thunderbird 4 to reach the danger zone, Sentinel was able to take the submarine up to the New York shipping lanes, after which Sentinel had to slow down in order to avoid crashing into other ships, while Thunderbird 4 would be able to move faster by going under the ships.

A lynx sea to air missile

The interceptor missiles preparing to fire 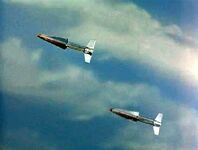 The missiles fired at Thunderbird 2 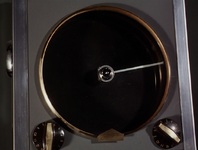 As far as is known, only two cutaway drawings of the U.S.N Sentinel exist. Both were illustrated by Graham Bleathman. The first appeared in issue 45 of the Redan comic series, and the second featured in the Haynes Thunderbirds manual.