Transom is a stub
You can help Thunderbirds Wiki by expanding it.

Transom is the scientist of The Hood seen in the 2004 movie Thunderbirds.

She developed The Hood's submarine that had a missile bay, from which a missile was launched at Thunderbird 5.

She was played by British actress Rose Keegan.

Transom was an intelligent scientist who served as one of the Hood's accomplices in his plan to use the Thunderbirds to rob the world's largest banks. She was a greedy woman but seemed to have an enormous crush on Brains, making multiple attempts at seducing him throughout the film. However, she did not let this get in the way of her employer's plans, stating coldly "Sorry professor, nothing personal". Transom was shown to have a consience however, when she warned the Hood that they could possibly kill a lot of people if they destroy the monorail. She could be quite comical sometimes, getting carried away with her attempts to seduce Brains before the Hood chastised her, shouting "Transom, concentrate!". Other instances where she provided humor occurred when Lady Penelope sent her flying into the swimming pool during a confrontation and getting her face smashed against a wall by Tintin when they faced off inside the Bank of London.

Transom was an accomplished scientist and engineer, having developed the submarine the Hood used as a mobile base of operations.

She was an expert in computers and hacking, being able to figure out how to infiltrate Tracy Island and pilot several of the Thunderbird craft, notably Thunderbird 2.

Transom also had some skills in hand-to-hand combat, but her ability paled in comparison to other fighters like Parker and Lady Penelope who swiftly defeated her in a humiliating manner. 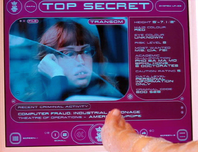