Tintin Belagant is the main tritagonist of the live-action Thunderbirds film released in 2004.

Her role inside the International Rescue Organization is fairly similar to what it was in the classic series. An important difference though is that, in the movie, she discovers the Hood was actually her uncle, and also that she has the same type of psychic powers as he.

She was played by Vanessa Hudgens.

(Under construction) Tintin and Alan are both out walking the beach when they notice Thunderbird 3 blasting off. Moments later, Fermat runs up and informs them that Thunderbird 5 has been hit. At first, Alan tells Fermat not to panic, but when they see the Hood's submarine surfacing off the island, they all realize something big is about to go down.

Unable to get to Tracy Villa before the Hood, they decide their best plan is to sneak in through the vents. They make it all the way to the Command and Control Center, where a shocked Tintin overhears the Hood telling Jeff that he's Kyrano's brother, and so, Tintin's uncle. Fermat then betrays their presence by his sneezing. Mullion grabs Fermat's ankle but is forced to let go when Tintin bites his hand. The kids then flee to Thunderbird 2's silo.

Thanks to surveillance cameras, the Hood knows exactly where they are, and quickly locks all the exits. While Alan uses the Thunderizer to blast a hole in the door to Thunderbird 1's silo (because from there, they can escape through the service tunnel), Fermat and Tintin keep Mullion busy with the Firefly, with Fermat driving and Tintin manning the foam cannons.

When they get to Thunderbird 1's silo, they find themselves cornered by the Hood and his gang of thugs, but Alan manages to get them out by hitting the "Release Duct Doors" button with a stone from his rock launcher. The duct doors open, and the kids fall down. Mullion quickly orders Transom to fire up Thunderbird 1, thinking the burning hot exhaust gases from its engines will finish them off, but miraculously, they emerge from the exhaust duct unscathed. They land in the ocean and swim to the nearest beach.

Fermat comes up with a new plan: to go to the island's satellite tracking station and hack into it, in order to give control back to Thunderbird 5. Tintin makes it clear that this would involve a dangerous trek through the jungle, but they decide to go for it. Their journey passes without incident, until Tintin notices that there's a venomous scorpion perched on Alan's shoulder. At this point, she clutches the crystal pendant she wears around her neck and telekinetically lifts up the scorpion and moves it away. Even though she declines to answer Alan's questions about what she just did, he realizes Tintin must have the same powers as her uncle.

After reaching the Satellite Station, Fermat manages to make contact with Thunderbird 5 fairly easily. Unfortunately though, their "unauthorized transmission" is very quickly detected by Tracy Island's surveillance systems, and the Hood orders Transom to jam it. The kids realize their transmission has betrayed their exact location, so they flee back into the jungle as fast as they can.

Having run out of ideas, they decide that all they can do now is wait for Lady Penelope to arrive. Alan thinks that simply waiting for her at the rendezvous point would be too risky. Instead, they need some type of vehicle, and Alan knows just where to find one: the junkyard. While he and Fermat race ahead, Tintin agrees to try and slow down Mullion, which she succeeds in doing by hitting him with a hornet's nest. 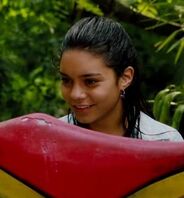