Thunderbirds Are Go was the first feature-length movie based on the Thunderbirds TV show created by Gerry and Sylvia Anderson.

The first mission to Mars (in the Zero-X) has just taken off, but The Hood gets his foot jammed in the trim while trying to plant a bomb. The Zero X falls out of the sky and crashes into the ocean. All on board survived.

In 2025 or 2064 (depending on who you believe), the Zero-X spacecraft launches from Glenn Field Spaceport as the first attempt at a manned mission to Mars. Unknown to Captain Paul Travers and his crew of two astronauts and two scientists, criminal mastermind The Hood has infiltrated the ship to photograph Zero-X's wing mechanism. When his foot becomes accidentally trapped in the hydraulics, The Hood unintentionally causes a major systems failure and Zero-X loses control. While the villain manages to extract his bloodied foot and parachute from the undercarriage, Travers and his crew eject in an escape pod and Zero-X crashes and explodes in flames into the ocean before leaving Earth's atmosphere.

In 2027 or 2066 (depending on who you believe), at the conclusion of an investigation into the loss of Zero-X, the Inquiry Board of the Space Exploration Center reaches a verdict of sabotage. In the meantime, a second Mars mission has been planned. Days before the launch of the new Zero-X, International Rescue agrees to a request to organize security in view of the possibility of another sabotage threat. Jeff Tracy dispatches Scott to Glenn Field in Thunderbird 1, while Virgil in Thunderbird 2 and Alan in Thunderbird 3 are assigned to escort Zero-X as it leaves the atmosphere. Posing as a reporter at the pre-launch press conference, Lady Penelope ensures that Travers and the other four crewmembers are delivered St. Christopher brooches. Ostensibly for luck, these are in fact homing devices that will allow Lady Penelope to keep track of them wherever they go. The next day, a search for Dr. Tony Grant's brooch checks negative. Scott unmasks the man waiting for lift-off on board Zero-X as The Hood in another of his disguises. The saboteur flees Glenn Field in a car, which Penelope and Parker pursue him in FAB 1. Transferring to a speedboat, and then a helicopter piloted by an accomplice, The Hood is apparently killed when Parker shoots the aircraft down with the Rolls-Royce's built-in machine gun. Meanwhile, the real Grant is returned to Zero-X and the spacecraft launches without further incident.

Mission accomplished, Penelope invites Scott and Virgil to join her at "The Swinging Star", a fashionable nightclub. Landing back on Tracy Island after escorting Zero-X, Alan feels unappreciated when Jeff insists that he remain on standby at base while his brothers spend the night partying, and even more frustrated when Tin-Tin can't go out to the mainland with him. In bed, Alan experiences a surreal dream in which Parker "flies" him and Penelope in FAB1 to a version of The Swinging Star located in space. Present at the interstellar nightclub are "Cliff Richard Jr." and The Shadows, who perform a song titled "Shooting Star" and an instrumental, "Lady Penelope". The dream sequence ends abruptly when Alan plummets from The Swinging Star back to Earth and awakes to discover he has fallen out of bed.

After a six-week flight, the Zero-X Martian Exploration Vehicle successfully lands on Mars on the 22 July. While investigating the barren surface, the crew are puzzled to encounter strange rock formations arranged into coils. Space Captain Greg Martin blasts one of the structures with the MEV cannon and Dr. Ray Pierce prepares to leave the vehicle to collect samples. However, the other formations stir into motion and reveal themselves to be one-eyed "Rock Snakes". Under attack from the extra-terrestrials, which are able to shoot fireballs from their "mouths", the Zero-X explorers are forced to effect a premature departure from the Martian surface. Docking with the orbiting command module piloted by Space Navigator Brad Newman, the astronauts start the flight back to Earth.

As Zero-X re-enters Earth's atmosphere on 2 September, a lifting body launched to assist the controlled descent fails to interface, damaging the escape unit circuit (EUC). With Zero-X locked in descent and set to impact Craigsville, population 4,800, Virginia, Jeff sends out Scott and Brains in Thunderbird 1 and Virgil, Alan and Gordon in Thunderbird 2. Winched into Zero-X's undercarriage, Alan must risk being trapped on board the spacecraft as Brains advises him on re-routing the damaged escape circuit. With Craigsville evacuated, Alan is left seconds to detach his cable, and Travers and the others eject just in time, moments before Zero-X crashes spectacularly into Craigsville. Collected by Penelope and Parker in FAB1, Alan is driven to the real Swinging Star and Penelope, joined by the Tracy family, Brains and Tin-Tin, all disguised to conceal their identities, propose a toast to Alan as the "hero of the day". 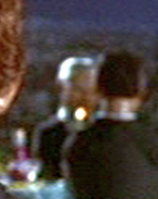 There were 3 scenes deleted from the movie. 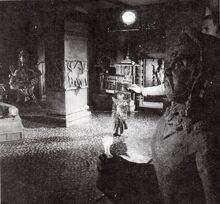 This picture shows the filming of the deleted scene with The Hood in his temple. 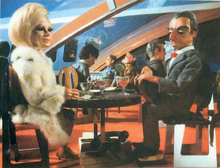 Lady Penelope and Parker aboard Fireflash 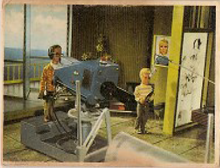 Another still from a deleted scene. (Gum card) 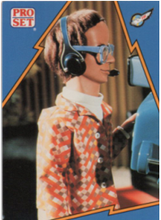 A close-up of Brains, as he appeared in the deleted scene. (Trading card) 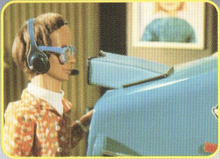 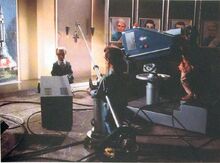 This scene from a Joe 90 episode was originally shot for Thunderbirds are Go. Notice the high level of distortion.

This is roughly what the Joe 90 scene would have looked like in the movie. 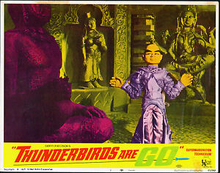 The Hood's deleted scene even made its way onto some publicity material, like this lobby card.

Main article: Behind the Scenes (Thunderbirds Are Go movie)

In a fascinating paradox, despite the series' popularity at the time, the film did poorly at the box office. 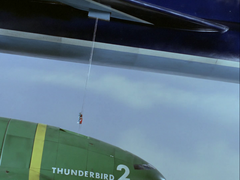 Movie poster (Italian)
Note how nothing in the illustration bears any relation to the actual movie. 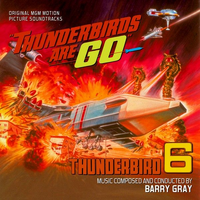