Thunderbird S, with "S" standing for "Shadow", is International Rescue's stealth aircraft, piloted by their chief of security Kayo Kyrano.

Although considered an official Thunderbird, TBS is not equipped, or often used, for rescue missions like the main five. Instead, TBS is used for bringing criminals who cause disasters to justice (much like Lady Penelope in FAB 1) and for maintaining the security of International Rescue's agents, equipment, and island base. It will often accompany Thunderbird 1 and 2 to the danger zone if the forces of evil are expected to be there waiting for them, or when they simply need an extra pair of wings.

TBS was designed specifically for stealth capabilities, and can fly extremely quietly with incredible agility. Designed and built borrowing designs of combat aircraft, and equipped with vernier nozzles on both the topside and underside of its thrusters, Thunderbird Shadow is the most manoeuvrable and agile of all the Thunderbirds; fully capable of dog fights despite being a rescue vessel. Its ability to seemingly appear and disappear like a shadow has led to the craft being aptly named "Thunderbird Shadow". Its instruments include a light/optic sensor and multi-purpose launchers. The cockpit is actually a motorbike, and can be lowered from the ship belly to be dropped off to the ground in situations where aerial pursuit isn't practical, while remaining in remote control with the main 'body'. True to its name and dedication to stealth, TBS is equipped with two underside claws instead of conventional landing gear, allowing to cling to walls and ceilings, or underneath other aircraft. Thunderbird Shadow also carries built-in cloaking technology, allowing it to become completely invisible both to the naked eye and on radar.

In Power Play, Thunderbird Shadow's engines are upgraded, allowing it to carry one of Thunderbird 2's modules to a danger zone in order to deliver new equipment in the event that the contents of the original module were inadequate for an escalating rescue situation.

The cockpit of Thunderbird S is a motorbike which can be deployed to the ground from the craft's fuselage when aerial pursuit is not practical, such as when Kayo needs to chase down a target.

Thunderbird Shadow can cling onto walls, ceilings and other surfaces using its grappling claws. Though they are meant for the craft to land on any surface, Kayo has used them to carry objects.

Thunderbird Shadow has electromagnetic cables. When Brains upgraded the engines in Power Play, the craft was able to carry one of Thunderbird 2's modules with them.

Also known as Stealth Mode, Thunderbird S can become invisible to the naked eye and on a radar at the flick of a switch. This is seen in Earthbreaker and Icarus.

First seen in SOS Part 2. It is shown that if even one control disc is attached to a vehicle, Thunderbird S can take control of it, so long as they are within effective range. 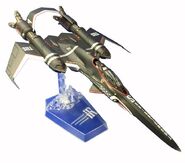 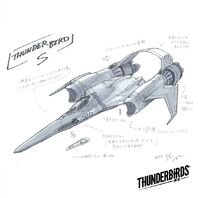