"Don't tell me they're gonna try a rescue with that thing! They must have got it from a museum!"
— Captain Foster

Having given Mr X (aka Brains, inventor of International Rescue's Thunderbird machines) an open brief to design their latest project, executives of the New World Aircraft Corporation attend a meeting to hear his proposals. They are astonished to hear that in an age of high technology and speed, he thinks it would be a good idea to build - a 21st-century airship. The committee room descends into hysterical laughter at his suggestion.

Following his return to Tracy Island, Brains is informed by Jeff Tracy that it's time for him to design and build Thunderbird 6 to complement the other Thunderbirds, although he admits he doesn't know what form this new craft should take. Brains, though, is reluctant to work without a specification, after his bad experience with NWAC. Jeff isn't unsympathetic: "Yes, they laughed - and then, they built it..."

Alan Tracy, Tin-Tin Kyrano, Lady Penelope and Parker are to be guests aboard the new luxury airship Skyship One as representatives of International Rescue on its epic maiden voyage around the world. Brains is unable to travel because of Jeff's insistence that the new Thunderbird 6 be operational as soon as possible. Alan has purchased and restored an old de Havilland Tiger Moth biplane in which he and Tin-Tin will fly to England to join Penelope and Parker for the airship launch. Back on Tracy Island, Brains works up several possible TB6 prototypes, but all are rejected by Jeff.

Before the launch, the crew of Skyship One are murdered and replaced by associates of the Black Phantom, led by Captain Foster. Because the ship is automated, it maintains a crew only in the event of an emergency, so the impostors' lack of knowledge goes unnoticed.

Their intention is to record Lady Penelope's conversations during the trip and edit her speeches to make a false distress call to transmit to Jeff, sending International Rescue to Black Phantom's lair at a disused airfield (10 miles south of Casablanca), where he can capture their aircraft. During the flight, Alan and the other guests become suspicious that the crew are not as knowledgeable as they ought to be, although Penelope is very taken with the dashing Captain Foster. After noticing a number of bugging devices in many of the rooms (especially those used by Penelope) they report their suspicions to Jeff via secret code while investigating the reasons for the spying. Eventually the crew manage to piece together the "distress call" and transmit it to John in Thunderbird 5, resulting in the launching of Thunderbirds 1 and 2. After establishing the crew's intentions, Penelope informs Jeff of their suspicions, confirming that the Thunderbird machines were heading for a trap. Jeff orders Scott and Virgil to destroy the Phantom's base.

Meanwhile, Alan confronts the crew, leading to a shoot-out in the engine room. A stray bullet hits the gravity compensator, causing the ship to slowly descend towards a huge missile base in Dover.

After the ship crashes onto a radio transmission mast, International Rescue must hold the ship in place to prevent it falling on the base before the ship, and the base below, can be evacuated. As Skyship One is balanced precariously on the tower, a light-weight aircraft is required for the rescue, so Brains flies the vintage Tiger Moth onto the top deck of the airship. However, the crew are holding the passengers at gunpoint, and Captain Foster commandeers the plane. Once in the air, a shoot-out occurs, in which Foster and the other conspirators are killed. Penelope is forced to take the controls, following instructions from Alan. This results in a number of near misses, including almost landing on an unfinished motorway and narrowly missing a chimney.

Meanwhile, the tower holding Skyship One collapses, causing it to crash spectacularly onto the missile base below. Alan attempts to land the biplane, but it runs out of fuel and crashes into some woods. The crew are unharmed, although they initially think they left Parker on the airship, they find him stuck in a tree having fallen from the plane just before it crashed.

Back at Tracy Island, the Tracy family gather on the Cliff House balcony for the official unveiling of the new Thunderbird 6. Jeff, though, can't understand how, since he never approved a design and too little time has passed for its construction. Finally, Brains introduces Thunderbird 6 - "built, tested and approved!" And as the cliff-face concealing Thunderbird 2's hidden hangar majeticlly pivots aside, what should emerge, but - none other than the Tiger Moth biplane! As the family laughs, Jeff agrees that the plane shall indeed become Thunderbird 6, stating its design is sound and has certainly proved its worth. 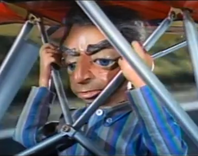 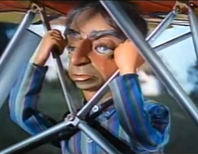 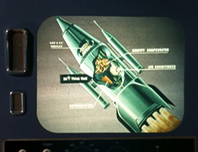 Main article: Behind the Scenes (Thunderbird 6)

MGM Betamax tape. The misspelt title apears on both front and back covers, as well as on the spine.
Community content is available under CC-BY-SA unless otherwise noted.
Advertisement