Thunderbird 5 is International Rescue's monitoring satellite space station, moored in a geostationary orbit 22,400 miles above the Pacific Ocean, directly above Tracy Island. Manned by John Tracy and EOS, it has two major roles: the first is to monitor the planet for potential disasters and receive distress calls when these arise, and as such, TB5 is equipped to scan the planet's surface in real time and listen-in on radio chatter regardless of language and location.

TB5's utility does not end once a rescue is set in motion, since the satellite's second role is to provide oversight and technical assistance during operations, hacking into and taking control of data networks and their stored information, vehicles and other machinery involved in or vital to the rescue. It also serves as logistical support with John and EOS pulling out whatever information or contact field assistance related to the current mission.

To this end, TB5 is equipped with powerful solar-powered supercomputers with holographic interfaces supplemented by EOS' own advanced capabilities.

The most unusual and unique Thunderbird, TB5 is not a hands-on rescue machine as a matter of routine, but is nonetheless one of International Rescue's, if not Earth's, most useful and powerful machines. TB5, unlike her sisters, was not designed and built for direct participation in rescues, so when she is called on to do just that, it is often a sign of desperation and just how bad the situation has gotten.

Though not a vehicle in the conventional sense, TB5 can, like many other satellites and space stations, move under its own power. Thrusters allow TB5 to raise or lower its orbit and then resettle into a geostationary situation behind or ahead of its normal mooring point above Tracy Island, allowing John Tracy to better observe a particular point of Earth. Smaller RCS jets allow the satellite to alter its attitude or to move to any point above the Earth.

TB5 is, however, typically in a geostationary orbit directly above Tracy Island to facilitate the best contact with International Rescue's headquarters, and thus it primarily acts as a housing for the powerful digital technology necessary for International Rescue to even function as a lifesaving organisation.

While the full extent of TB5's abilities is unknown, it is clear that it can access the Internet (or 2060's equivalent), digital archives and communications and affect machinery remotely. Its sensor arrays are powerful enough to allow the satellite to receive distress calls from as far as Jupiter. On certain occasions EOS will caution that such actions are violations of one or more codes or laws, and it is a capability open to abuse in the wrong hands. However, TB5 is only ever shown to use such abilities if the outcome saves lives. As such, TB5's systems are never shown to disrespect day-to-day privacy.

The central structure of TB5 is shaped rather like a microphone. Around what would be the "grill" is a toroidal structure containing most of the station's rooms and facilities. This ring spins around in order to generate artificial gravity, explaining how John is able to remain in space for extended periods without suffering the musculoskeletal degradation that can be caused by extended spaceflight. For unexplained reasons, the ring can rotate at a much faster speed than is needed to generate 1G of gravitational force, allowing it to easily go above 25g, and EOS, while hostile, abuses this facility to subject John to extreme G-forces in an attempt to kill him.

A childlike, yet clever artificial intelligence within the computers of Thunderbird 5, who keeps John company and occasionally helps on his tasks. EOS uses cameras around the satellites interior and exterior to observe and assist, and often supplements TB5's already powerful systems with her own capabilities.

The outside of the ring is also the place to look for Thunderbird 5's Space Elevator, allowing John to visit Tracy Island at will provided TB5 is in geostationary orbit above the island. This means that the satellite is equipped with (and can store) at least 22,500 miles of cable. EOS comments that this cable is incredibly thin, though John expresses faith in its safety given Brains' tendency to over-engineer everything he designs to ensure near-absolute safety. It is likely, within the 2060 context, that the cable is some form of carbon nano-wire or some material of similar traits or strengths.

Thunderbird 3 is also capable of travelling to and docking with Thunderbird 5, with the TB3 dock at the center of the gravity ring. Three secondary docking ports allow TB3's arms to secure the ship in place more firmly. Besides an attempted docking during the EOS incident, Alan took Gordon up to TB5 for monitor duty while John was away with Lady Penelope in The Man From TB5 even though it is still unknown how the crew of TB3 get into TB5.

The elevator is surrounded by several small boosters and has a claw on the end, allowing it to directly interact with large objects in space (or far down below on Earth) with precision should it ever need to. While its primary purpose is to connect the satellite with Tracy Island, allowing John to easily travel to and from Earth as well as deliver supplies to TB5, it has seen being used for rescuing a weather station and dismantling the Hood's hubship - something it is not designed to do but performed adequately nonetheless - a notable example of Brains' tendency to over-engineering.

Thunderbird 5 has a variant of the multi-function Pod system seen in Thunderbird 2 and in a more limited fashion on board Thunderbird 3. First seen in just before the invasion of Tracy Island by the Hood, it is coloured grey instead of yellow. To date, John has only performed one known mission in the pod, namely to fix the Global Flood Control Network's satellite after it went offline (which turned out to be an intentional false alarm by The Hood). Unlike other Pods, TB5's is used in an upright position, equipped with two flexible arms on the sides and two rocket boosters on the back.

It is unknown if Thunderbird 5's Pod has other interchangeable components like the Pods carried by Thunderbirds 2 and 3.

In Ghost Ship, TB5 is revealed to have been upgraded with a new Exopod system. This is a yellow exoskeletal suit assembled by EOS and TB5's systems onto John's spacesuit. It is equipped with a powerful jetpack that, as a minimum, can carry John from geostationary orbit to the L1-lagrangian point between Earth and the moon in a very short space of time. With the Exopod, John can carry out small scale rescues in and above Earth orbit without the need for TB3 to launch.

At times where John would need to assess a developing situation without dispatching any of the others he can launch a small probe from the cargo bay to travel to a designated area. This was first seen in the episode Lost Kingdom when he used it to search a area in the Aegean Sea for possible signs of a seaquake. It is currently unknown how many probes Thunderbird 5 has at it's disposal.

Thunderbird 5 is featured in almost every episode so far (with a notable exception of it being absent in Unplugged, Designated Driver, Rigged for Disaster).

Thunderbird 5 is the central Thunderbird in two stories, namely EOS, in which it was hi-jacked by EOS, a rogue artificial intelligence that had evolved from an old game program of John's, with EOS seeking to incapacitate Thunderbird 5 in the belief that John was trying to destroy her after it had detected him searching for her. Although EOS attempted to kill John by locking him out of Thunderbird 5 while transmitting false messages to Tracy Island, John was eventually able to regain access to the satellite, subsequently convincing EOS that he wasn't a threat by trusting the A.I. not to kill him by removing his helmet inside the space station. Having regained control of Thunderbird 5, John offers to keep EOS in the satellite for company, and she currently does so.

In Skyhook, John is forced to use Thunderbird 5's orbital thrusters and the space elevators claw to manoeuvre the satellite from its usual position above Tracy Island to capture a rapidly-ascending low-atmosphere weather station after all other Thunderbird craft are put out of action due to various design flaws in the station.

The elevator claw being swung at the Hood's ship

The claw impacting against the Hood's ship 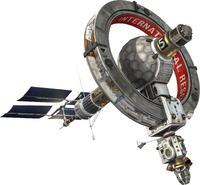 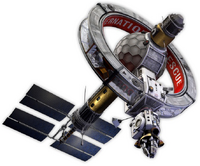 Compared to the Original

Thunderbird 5 is the craft that has undergone the most extensive update from the original series. The space station's centre is now a completely round ball which is the main communications hub - no longer looks like a giant pork pie - with the ring now designed so that it is something you could inhabit and still conduct various operations from while being able to ajust the gravity onboard the station with it's rotaional speed. However, rough "L" shape of the entire satellite still remains along with the general gold and grey colour-scheme, what's radically different is what it is like on the inside. The original was huge and much more luxurious, and makes the new version look more like a caravan, it also had inexplicable gravity in all areas you could walk into instead of only certain ones like in the redesign. The design itself is more akin to real world space stations that we have in use today.

However, in terms of functionality, the new version is far superior. The original Thunderbird 5 was only used to answer distress calls transmitted via radio, and occasionally to track down various signals. The modern take does so much more, able to be an active participant in rescues rather than just a passive observer, with its greatly expanded ability to watch over people, its ability to scan and predict weather, and its fantastic capacity to hack into and possess earthbound machines of all kinds, such as when it switched the train tracks in Runaway. It can also access any piece of information that is out there digitally, unless it's too well protected. The 2015 version is also more convenient in that Thunderbird 3 is no longer needed to take John back to Earth thanks to the space elevator, although the rocket can still pay visits and dock. Speaking of docking, the newest incarnation was also shown to be able to dock with other vehicles outside of Thunderbird 3 in Skyhook, where it did so with a weather station that wasn't even designed to travel into space. 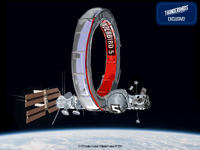 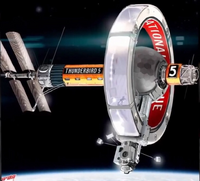 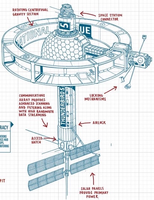