Usually manned by primary space monitor John Tracy, we're informed in-series that he trades-off with his younger brother, Alan - and sometimes even his older brother, Scott - on one-month shifts aboard the station. Brains is a frequent visitor, to assure TB5 keeps in perfect working order; and even Virgil and Gordon have visited on occasion!

Bristling with antennae and a myriad of sophisticated listening devices, TB5 is a world all its own - unique, even amongst the company of its sister Thunderbirds. Its mission is of paramount importance to the very existence of International Rescue...

Step into its spacious control room - and be greeted by a spectacular vista of the Earth, through a long observation window of thick shatterproof glass. Elsewhere, along one entire wall, countless radios (covering most frequencies) and speakers enable whoever's on monitor duty to listen to incoming signals in all as many languages.

This sensitive equipment (capable of transmitting and receiving both audio and video) detects, amplifies and (as necessary) translates appeals for help - assistance IR, alone, is capable of providing - which are then relayed to IR headquarters on Tracy Island for action; and, once again, Thunderbirds are GO!

Although well-shielded and otherwise protected, TB5's main control room is further backed-up by a specially-built duplicate control facility should an emergency situation arise. All monitoring functions are automatically transferred; computer systems are independently-powered via the adjacent solar energy panels, and all data is duplicated from the primary systems, to assure that TB5 remains in continuous service. 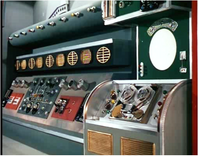 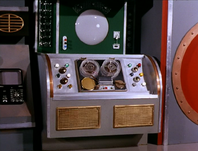 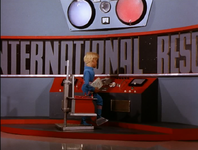 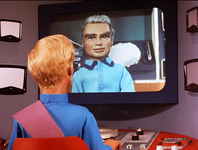 One of several speaker systems. 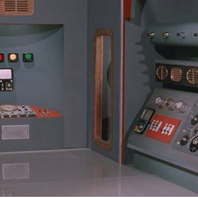 Home away from home

A room with a view!

Thunderbird 3 provides transport to and from Thunderbird 5 - docking with the space station via its custom-designed docking collar and airlock - as well as caches of fresh supplies and transfers of monitor personnel.

Just off the control room, are sleeping quarters where the crew can rest when not on-duty. Since rescue calls detected by the station's computers are broadcast throughout TB5, John can easily access these communications wherever he is on the station, at any given moment...

The Haynes Thunderbirds Manual describes additional facilities (eg, accommodation areas for more crew members if the need arises), along with other facilities to make Thunderbird 5 John's man-cave (!) - perhaps most notably (and spectacularly), John's state-of-the-art telescope, housed in a protective astrodome atop the station, enabling him to indulge his passion for astronomy during down-time between distress calls.

Thunderbird 5 first appeared in the pilot episode Trapped in the Sky and was the first Thunderbird machine to be seen in the series (both in the title sequence and in the actual episode).

John was also the first of the Tracy brothers to appear on-screen (the first family member was his father, Jeff).

TB5 appears at least briefly in most episodes, due to its key role in picking up calls for help. Generally, it is limited to receiving and transmitting such requests to Tracy Island, but occasionally its job in a rescue is more involved. In total, it appears in 23 episodes: Trapped in the Sky, Pit of Peril, City Of Fire, The Uninvited, The Mighty Atom, Vault Of Death, Operation Crash-Dive, Martian Invasion, Brink of Disaster, End Of The Road, Day Of Disaster, 30 Minutes After Noon, The Impostors, The Man From MI.5, Cry Wolf, Danger At Ocean Deep, The Duchess Assignment, Attack of the Alligators!, The Cham-Cham, Atlantic Inferno, Path Of Destruction, Ricochet and Give or Take a Million.

In Operation Crash-Dive, it was Alan's term of duty on Thunderbird 5. He was responsible for keeping track of Fireflash, and was consequently able to report its true location when the aircraft's tracking system reported a false position.

In Ricochet, the space station was undergoing repairs when Rick O'Shea's satellite fell out of orbit, so it never received the call for help. Fortunately, Tin-Tin heard the transmissions on her television in time for a rescue to be effected.

TB5 also appears (via archival footage) in Introducing Thunderbirds and The Abominable Snowman, for Thunderbirds 1965.

Thunderbird 5 has appeared in no less then eighteen different publications - but in only four basic designs, three of which are illustrated by Graham Bleathman.

(For a full list of books and magazines which the cross-sections (cutaway drawings) appeared in, please refer to the above-linked article.)

Following the end of season 1 of Thunderbirds, TB5's control room underwent a major aesthetic and technical refit... and appeared in season 2 episodes Path of Destruction, Ricochet and Give Or Take A Million.

John's sleeping quarters were also revamped; and in the series' season 2 premiere - Atlantic Inferno - TB5's new look is fully on view...as John, abruptly awakened in the middle of the night, is called into action when a explosion out in the Atlantic Ocean critically endangers the massive drilling rig Seascape...

Throughout Season 1, Thunderbird 5 was depicted in essentially the same stock-footage sequence (Thunderbird 3 visits notwithstanding; see section above). For the feature films Thunderbirds Are Go and Thunderbird 6, however, new views - from different perspectives - highlight TB5 in perpetual orbit out in space, beyond Earth... 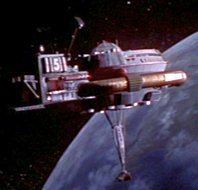 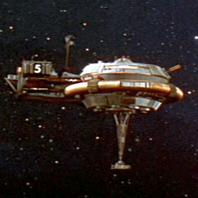 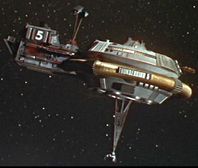 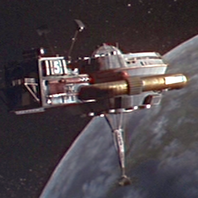 The model was further modified after filming had ceased.
Français
Community content is available under CC-BY-SA unless otherwise noted.
Advertisement