Thunderbirds Wiki
Register
Don't have an account?
Sign In
Advertisement
in: Thunderbirds Are Go!, Thunderbird 4, Vehicles,
and 25 more

Thunderbird 4 is International Rescue's technologically advanced submarine, with a maximum operating depth of 30,000 feet. Though the tiniest of the Thunderbirds, she makes up for it by being the only one who can operate underwater and is well equipped to do so. She is used for saving innocent lives all around the globe in water based areas such as oceans and rivers. She is piloted by aquanaut Gordon Tracy, who unfortunately has a knack for getting into situations that result in her coming back in less than mint condition.

TB4 is the smallest Thunderbird of them all and one that is designed to withstand immense deep sea pressures; this helps grant its immense durability and capacity to explore undersea caves, but it also means it is far from convenient enough for the yellow submarine to go to the danger zone by itself, due to limited range, low speed, and complete inability to travel unless submerged underwater. Thunderbird 4 is therefore airlifted to the danger zone aboard Module 4, one of the six Modules that makes up the center of the supersonic Thunderbird 2. Should the latter vehicle be unavailable, Thunderbird 4 can leave Tracy Island alone for a mission that is close enough.

Thunderbird 4 can be entered via an underside hatch, which leads straight to the little cockpit (designed for Gordon to control, however it has managed to squish three other people into its small space - presumed standing room only (as seen in Deep Search), and a door at the back where rescued people and equipment can be put. Bright lights emit from the very front of the vehicle, allowing Gordon to see in the deepest and darkest of waters. Thunderbird 4 has many small windows on the sides and underneath the cockpit, and even the backdoor has transparent surfaces, further adding to the freedom of exploration. Thunderbird 4 has a flexible fin and two small engines at the back which allow for surprising speed and agility, even though it is still vital for Thunderbird 2 to carry it wherever it needs to go. Where there's Thunderbird 4, there's usually Thunderbird 2.

TB4 has two robotic arms that are tucked away on the underside. They swing out when in use, and Gordon controls them directly while looking through the transparent floor to see what he is doing. The left arm ends with a pincer claw, while the right arm can either end with another claw or a plasma cutter.

Close up of the internal controls

Located within the side protrusions are torpedoes used for demolition. They also have homing properties, allowing them to hit home on other machines and vehicles.

These can be found on the lower sides of TB4, close to the Robotic Arms. These harpoons, attached to cables like a grapple gun, can be fired forward quick enough to penetrate rock.

The name given to two evacuation pods contained within the same protrusions that store the torpedoes. Fired from the rear, they float swiftly to the surface of the water upon being released. They are big enough to contain one person each, unless perhaps if that person is too tall and/or fat.

First seen in Chaos Part 1 this is the name given to two large pods that used to balance and raise large platforms or vechiles that have been submerged for various reasons. It is stored in the same protusions that store the torpedeos and the dry tubes. They are launced from the front of the ship and the ballons can be quickly deployed to raise the object in question. 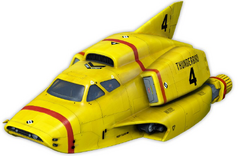 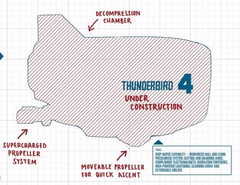 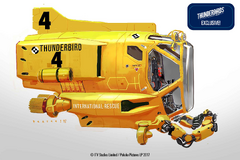