Thunderbirds Wiki
Register
Don't have an account?
Sign In
Advertisement
in: Thunderbirds Are Go!, Equipment, Vehicles,
and 28 more

Thunderbird 3 is a giant SSTO (Single Stage to Orbit) space rocket that is revolutionary in terms of speed, functionality and reusability. A real red hot rod, she was created by Brains and is owned by International Rescue. Her existential purpose is to save the lives of people who are in mortal danger outside of the Earth's atmosphere, though she has been used unconventionally several times. It is piloted by Alan Tracy, and sometimes co-piloted by Kayo or Scott Tracy. John Tracy has also co-piloted the craft on several occasions, (each of these cases, however, have shown John joining the mission in progress, rather than being involved in the launch procedure). Virgil Tracy and Gordon Tracy have both co-piloted the craft twice.

Although capable of agile atmospheric flight (as seen in Skyhook & Falling Skies) and handles well in situations where gravity is significant thanks to its powerful thrusters, TB3 lacks wings to generate lift and is primarily designed for space rescue missions, usually only flying straight upwards to space after launching. It can move very freely in space using vernier thrusters built around its whole body to perform delicate maneuvers. The engine array at the base of the rocket includes an incredibly powerful central ion engine for extremely long distance space travel, and three rocket engines surrounding it. Three grapple arms connect the middle of the ship to the three rocket engines, which can be deployed for various uses. The cavities where the arms sit has nozzles, allowing the engines to fire frontward when the arms are deployed.

TB3 has highly advanced heat and radiation shielding, allowing it to get very close to the sun without suffering meltdown in its systems. Its ion engines allow travel to other large nearby celestial bodies in a relatively short time. The rocket can travel to the sun in a matter of hours and Jupiter, within a few days; both of which could take months when done conventionally. While TB3 has large fuel reserves, the amount of fuel carried is mission-specific, as seen in Slingshot, where TB3 almost ran out of fuel around the sun forcing Alan to slingshot TB3 around the sun to get back to Earth, while it never had problems traveling to and from Jupiter in Deep Search.

TB3 sports a cargo bay above the engines that can carry and assemble one Pod that is specialized for outer space rescue. While the cargo bay is large enough to carry more than a dozen people even with the Pod in it, it is ill-suited to doing so as it has only large bay doors instead of airlocks.The cockpit is located in the upper-middle of the rocket's body and it has 4 seats, making it the largest cockpit among all the Thunderbirds. Windows form a ring all around the fuselage, and the cockpit can rotate so that Alan can see all around the outside. This cockpit is home to an airlock exit as well as the Space Surfboard.

Just like Thunderbird 2, Thunderbird 3 has a Pod inside its cargo bay, but unlike Thunderbird 2, there is only one Pod. This particular Pod looks identical, save for the circular magnetic dock on top of it, but it is specialized for outer space rescues. Its various attachments are unique, and are stored in red crates, ready to be picked up and fastened on by the robotic arms of the bay. Thunderbird 4 can also be carried and modified within the cargo bay of Thunderbird 3.

As of season 3, the pod in Thunderbird 3 is changed to one red in color and dubbed "space pod". How this particular version of the pod differs from the standard ones is currently unknown.

Thunderbird 3 has a large drill stored in its nose cone, which provides Thunderbird 3 with a strong grip on unstable structures; such as meteors and comets. As seen in Life Signs, the drill part can be extended very far from the main body, connected through a shaft that runs the length of the rocket. Due to its size and main purpose as essentially a stabilizer instead of a dedicated tunneling equipment, it is ill-suited for precision drilling.

Thunderbird 3 has three grapple arms used for latching onto structures in space such as satellites and debris. Usually, the arms are attached to the three booster engines of Thunderbird 3, but when in use, they fold out from the engines and extend forwards. These arms are also used to help Thunderbird 3 dock with Thunderbird 5. The tip of each arm contains one tow cable used for stabilization during landing. One one occasion, Thunderbird 3's grappling arms and central body were modified into the Maximum Max, allowing her to go toe to toe with the Mechanic's Deep Ocean Surveyor in a zero-gravity fight. Instead of grapple arms, they were replaced with a robotic hand, a buzz saw and a plasma cutter. 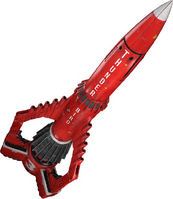 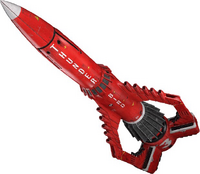 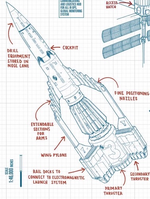 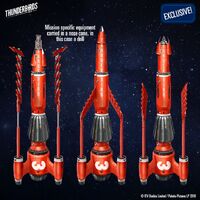