Thunderbird 2 is a blue and silver hypersonic transport craft. Piloted by Jesse Rigel and Johnathan Jordan Jr., the vehicle acts as both a booster for Thunderbird 1 to reach orbit, and carry an array of smaller Thunderbird vehicles to the danger zone. These crafts usually reside in a removable square Pod construct, which connects between TB-2's booster rockets.

Stored behind the nosecone are a group of grey mechanical arms. Lengthy and slender, they are primarily designed to grasp out of control space vehicles, rockets, and satellites. Only two are required for most missions, but another pair can be deployed if necessary.

Should a large group of people require rescue from an isolated area, TB-2 can deploy specially designed rescue pods. Stored below the nosecone section, each pod is attached to a wire cable, allowing them to be safely and individually raised or dropped around the danger zone. Six pods, along with two larger 'deluxe' capsules, are usually carried. At least two pods have been destroyed during rescue missions.

A high intensity laser cannon can be extended from the nosecone section. With pinpoint accuracy, the beam was designed to effortlessly carve through thick layers of steel, though could sometimes be used for defence against any potential attacks. While one of TB-2's most steadfast and reliable attachments, the cannon was ultimately destroyed.

With the exception of Fault Line and Trial, Thunderbird 2 appeared in every episode. 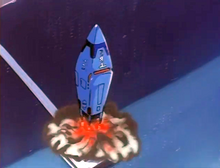 TB-2 lifts off from Arcology. 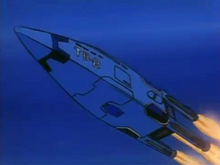 TB-2 in flight
Community content is available under CC-BY-SA unless otherwise noted.
Advertisement