Thunderbirds Wiki
Register
Don't have an account?
Sign In
Advertisement
in: Thunderbirds Are Go!, Rockets, Vehicles,
and 38 more

Thunderbird 1, built by Brains and piloted by Scott Tracy, is a variable geometry (swing wing) VTOL rocket plane belonging to International Rescue. Like Thunderbird 2, it is used for earthbound rescue missions, operating at a maximum height of 150,000 feet.

Thunderbird 1 is capable of 15,000 miles per hour, making it one of the fastest planes in the world, if not the fastest. The only known ship to be able to exceed it in terms of speed was the prototype TV-21, Jeff Tracy's first ship prior to the formation of International Rescue. The primary role of Thunderbird 1 is often to simply get to the danger zone and scout around so that a rescue operation can be planned before the equipment needed arrives via Thunderbird 2, but it'll often play a supporting role alongside the jolly green giant with its own gear and special abilities, which occasionally makes it the only Thunderbird necessary for the job.

With a sharp red nosecone, a cylindrical silver body, and a powerful blue engine, TB1 is built for pure speed and can reach anywhere on Earth within an hour, evident from the fact it has the most number of rearward thrusters of all Thunderbirds alone. TB1 takes off from Tracy Island vertically, but shifts and stays into horizontal flight shortly after. TB1 has a high speed mode and a slow/landing speed mode. During the former, which it launches in, the small sweep wings are entirely tucked in, and the cross shaped bottom is positioned in the manner of a plus sign. When coming into land or simply when flying slower and steadier, the wings extend and the back rotates into an X. The wings must always be extended when landing horizontally, since landing legs are located within them. TB1 only lands vertically when returning to Tracy Island.

TB1 has a definite underside and topside when flying horizontally; the underside has four VTOL jets, a large glass window for the pilot, and bay doors in the midsection, while the topside just has "THUNDERBIRD" written down it, completed by the "1" painted on both sides of the blue coloured section.

The interior goes from the nosecone to the wings. The pilot's chair is located at the front (near the nosecone) where the windows are. There are no front facing windows with the aerodynamic nosecone taking up the entire front. Thunderbird 1 flies almost entirely via instrumentation provided by the forward holographic display. The windows underneath can open up, and the chair can be carried outside via a robotic arm, providing swift entrance and exit. The underside bay doors lead to the rest of the interior, where the ceiling contains a long-ranged electromagnetic cable that can have different attachments at the end such as clips, and ladders allowing swift passenger boarding. Despite being designed as a first responder and scouting craft, it has occasionally been enough to make her the only Thunderbird needed for a mission, as seen in Runaway. It also has a rescue capsule that is used to transport a single individual is seen in Brains vs. Brawn but it is unknown how many capsules can be stored in Thunderbird 1.

Scott runs over to the two lighting brackets next to Kayo's picture. He pulls the brackets down over his shoulders, like the safety harness on a theme park ride. This motion causes the section of the wall with the painting on it to revolve around, revealing a secret compartment containing Scott's flight suit, gauntlets and boots. He stands in front of it all, and this triggers a high-speed lift which takes him to the launch bay. Robotic grabs attach his flight suit to him.

At the launch bay, the doors open, and Scott steps onto a moving platform which takes him to TB1. As soon as the platform has reached the pilot's chair, it stops, prompting Scott to get into it and strap himself in. The chair is hydraulically lifted into TB1's cockpit via a robotic arm, whilst the platform retracts and the cockpit windows close.

TB1 is taken up rails to the pool/firing area, where lights come on and the pool retracts under the house. TB1 ignites and launches, the backblast from her thrusters scattering the pool's sunbeds. Finally, Scott will then change into horizontal flight mode, and his chair will adjust to stay upright.

Thunderbird 1 has a grapple installed in the cargo bay. The end of it can also be swapped for a clip, like seen in the episode Runaway.

When dealing with an unstable aerial platform, Scott gets in close to examine the platform using the 'Skypod', a short-range flying capsule that allows him to get in close to a target where Thunderbird 1's size would be a disadvantage.

Thunderbird 1 is equipped with several remote operated drones that can be deployed to search multiple areas or places that cannot be reached by convential means (a area that Scott cannot fit). They were first seen in SOS Part 1 when Gordon uses them to search for Sherbet when he goes missing.

Later on, in Avalanche, Scott used two drones to find Brandon Berrenger's colleague Goose who was trapped inside a cravasse.

Then, finally in Firebreak, Scott deployed a squadron of drones to help Thunderbirds 1 and 2 in lifting the Crablogger clear of the flood from an exploded disused dam, which put out the forest fire. 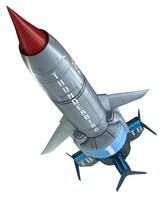 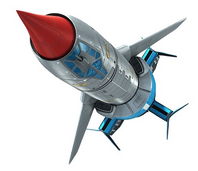