Thunderbird 1 is a sleek white and blue space shuttle. Piloted by Captain Dylan Beyda (or Kallan James on occasion), the craft was initially constructed by NASA for deep space missions before being acquired and upgraded by IRO. Fitted with a new Ultimate Mark 10 HF computer guidance system, Thunderbird 1 serves as IRO's mobile command centre for operations both on and above the planet.

A pair of large mechanical arms are stored above Thunderbird 1's wings, which can be deployed to grasp out of control space vehicles, rockets, and satellites.

When faced with dangers such as an overloading nuclear reactor, two vents directly below the craft can emit a powerful burst of super cold helium over a wide area, freezing its target almost instantly.

Hidden between the vents is a small laser, designed to cut through almost any substance with pinpoint accuracy.

With the exception of Trial, Thunderbird 1 appeared in every episode. 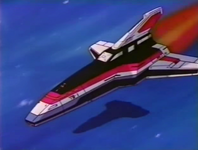 In flight
Community content is available under CC-BY-SA unless otherwise noted.
Advertisement