Edit
watch 01:36
We're Getting Mutants in the MCU - The Loop
Do you like this video?
Play Sound

The Mole is one of the many pod machines available for use by International Rescue. It's transported to danger zones by Thunderbird 2.

The Mole is a medium-sized tunneling vehicle used for underground missions. Once arrived at the danger zone, it exits its pod and is transported to the drilling location by a trolley with caterpillar tracks. A lifting ramp then tips it into position to commence drilling.

An additional set of caterpillar tracks on either side of the vehicle allows it to return to the surface independently, for retrieval. It's equipped with a thermal-imaging system, inside the drill-bit, to locate buried individuals. 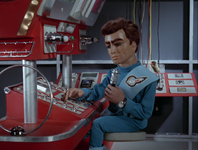 Scott at the controls

Scott, seen through a cockpit window
(Pit of Peril) 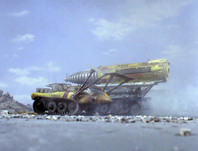 Virgil had been lowered into the pit where the Army vehicle Sidewinder lay trapped, to place explosive changes prescribed by Brains. Scott then used the Mole to tunnel down into the side of the pit, to bring his brother back to the surface.

The Mole in Pod 5 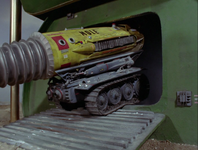 And, down it goes!

Scott starts to bore down to the pit wall 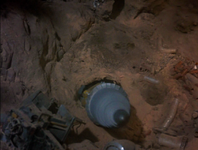 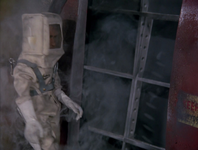 After the Firefly cleared a path through the burning rubble, Scott and Virgil used the Mole to drill down to the underground passage-ways of the collapsed Thompson Tower building, to rescue the trapped Carter family. 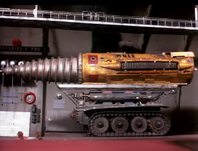 The Mole in Pod 3 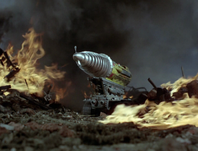 The Mole travels through the path, cut by the Firefly 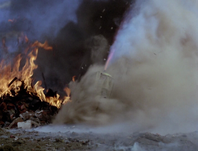 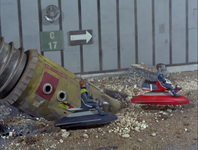 Scott and Virgil (To the rescue) on their Hoverbikes 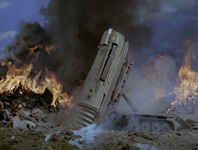 Virgil used the Mole to drill down under the burning Country House, and into its basement, to rescue the kidnapped Duchess of Royston before the building collapsed.

The Mole inside the pod

Virgil at the controls

The Mole is amongst several pod vehicles on view in TB2's pod bay.

The Mole (far left) in the pod bay, next to the Fire Tender

As far as is known, at least four cutaway drawings of the Mole exist. three of which were illustrated by Graham Bleathman. The first appeared in Thunderbirds Annual 1967 by an unknown artist, the following were all by Bleathman.