Thunderbirds Wiki
Register
Don't have an account?
Sign In
Advertisement
in: Classic Thunderbirds, The Mighty Atom, Equipment,
and 3 more

The Mighty Atom is an amazing surveillance device which to all intents and purposes looks like a small mouse. In actuality, it incorporates a powerful concealed miniature camera that can penetrate installations undetected and photograph control systems by focusing on the technician's faces as they monitor the control panels.

As a safety factor, if the mouse is seen or approached, it runs for the nearest cover and hides like a real mouse.

The Hood, under the disguise of Professor Langley, had been invited to a demonstration of the "Mighty Atom" at a government research unit. He used his hypnotic powers to overcome the demonstrator and the other guests, and then stole the device to photograph the control room of the new irrigation plant built in the Sahara Desert.

When Thunderbird 2 arrives at the scene of the fire, on board is Lady Penelope Creighton-Ward who had begged Jeff Tracy to let her go along on the mission. The Hood sends in the Mighty Atom to photograph the controls but is furious when he later discovers that the robotic mouse has instead taken pictures of Lady Penelope screaming at it because of its programming causing it to focus on photographing a moving figure rather than the immobile control systems.

In anger, the Hood then destroys the device.

The Mighty Atom: powered by a micro fusion power battery. Its "tail" is a remote control steering and computer data signal antenna. Its "whiskers" are anti-collision warning sensors

Remote control unit: an antenna is built into the control joystick

Data port: on top is a gold-plated mouse-to-port data input and transfer terminals which the Mighty Atom is placed onto for transferring photos, computer, and video data to a computer or TV screen 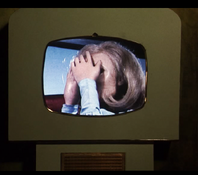 The Hood destroying the device in anger 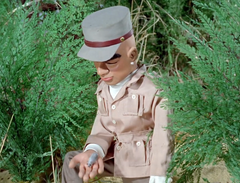 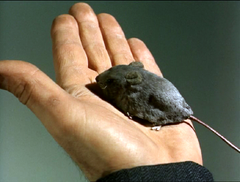 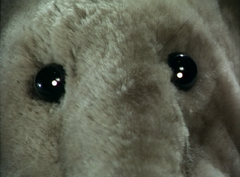 A 3rd prop was used for the extreme close-ups.
Community content is available under CC-BY-SA unless otherwise noted.
Advertisement