"I take what I want, from who I want, whenever I want it."

The "Mechanic" is a former villain in Thunderbirds Are Go! TV series, debuting in season 2.

The Mechanic, just like Brains, is an inventor. However, he decided to use his creations for diabolical means instead of for good. One notable invention of his are the Mechas, a suite of drones used for harm, which include the Scorpion Mecha, Ray Mecha and Air Mecha. At the end of Brains vs. Brawn, it was revealed that he'd actually been under The Hood's control and did what he did because of it. In the same episode, he was arrested by the Global Defence Force.

In Chaos Part 2, it was revealed that he was put in the space prison known as the Hex, unmasked and without his gear. In Break Out, he escapes the Hex after it is destroyed.

In the latter part of Season 3, he is freed from the Hood’s control and he helps Brains reconstruct the T-Drive engine.

Some of the Mechanic's most prominent traits were his ruthlessness and fearlessness. He was not the least bit concerned about innocent bystanders who got caught up in his schemes. Examples of this trait were shown in Earthbreaker, when he did not stop his machine despite the trapped miners and the GDF's warnings and threats. In City Under the Sea, a family of tourists were trapped under rubble and the Mechanic simply continued with his plan without thinking twice. In Up from the Depths Part 1, the two crew members stuck inside the Surveyor were running out of air. He had no qualms with letting them suffocate to death. In fact, he barely noticed innocent people at all. He seemed to completely lack any form of empathy or concern for others but himself. His lack of concern for collateral damage was so severe that he would aggressively lash out at any attempts solely made to save said innocent bystanders, without any intention to even interfere with his plans.

The Mechanic was also very arrogant, claiming that he took "what he wants, when he wants, from whoever he wants". He didn't seem to consider International Rescue or the GDF as even potential threats, despite his continued defeats at their hands. This aspect of his character always played some part in his downfall. Although he and The Hood shared this particular arrogance and lack of concern for authorities stopping them, The Hood was more careful and stealthy with his approaches, preferring to not alerting anyone to his presence, while The Mechanic was always unnecessarily flashy with his entrance, without any care for any kind of opposition he may come to face later.

He was rather mysterious, hiding his face behind a mask at all times and using a voice scrambler, thus never revealing his true identity to his adversaries. He was very determined, tenacious, audacious and ambitious in his plans and schemes. On at least two occasions his plots involved collecting large amounts of energy or resources, the purpose of this was never revealed, but deduced to be connected to The Hood in one way or another.

While not openly shown during his confrontations, the Mechanic did seem to have a certain paranoid side to him. This could be proven by the fact that many of his machines were typically armed with self-destruct capabilities, showing that he preferred to destroy his operations rather than leaving anything behind that could potentially reveal his true identity or allow his opponents to recover what he had stolen. This would also indicate that the Mechanic never admitted defeat, merely setbacks.

In Brains vs. Brawn, the Mechanic revealed despite appearing to be a staunch and faithful ally of The Hood, he actually only did so because the latter could control him using his cybernetic eye, and he had been looking for ways to get rid of The Hood ever since while still working for him. It is also revealed that he was callous and ruthless not because he enjoyed being so, but because he was helpless and desperate, wanting to be free of The Hood's control as soon as possible, and he did not take kindly to anyone standing in his way to freedom.

In Break Out, when the Chaos Crew tried to bring him back to the Hood, the Mechanic refused to leave the Hex, knowing that he wouldn't be free of his former ally's control. So, the Chaos Crew decided to blow up the Hex to get him out. However, International Rescue also needed the Mechanic to help Brains to reconstruct the T-Drive engine as he was the engineer of its original design. But, the Mechanic was still full of sorrow and regret for all of the things he'd done under the Hood's control, hence why he preferred to stay aboard the Hex despite the damage done by the Chaos Crew. Kayo tried her very best to convince the Mechanic that he could make amends and reminded him of Brains' promise. Initially, it seemed that the Mechanic sacrificed himself when the Hex exploded; however, he'd somehow managed to escape its destruction as International Rescue were very surprised to see him arriving at Tracy Island. Brains explained to him that the T-Drive engine was successful, whereas the Mechanic was under the belief from the Hood that it was a total failure. Brains agreed to keep his promise to the Mechanic, whilst the Mechanic agreed to help reconstruct the T-Drive engine.

The Mechanic lived up to his name. He was a master criminal, second only to the Hood and even worked for the latter. He was a scientific genius whose mastery of technology seemingly knows no bounds, the Mechanic having demonstrated expertise in mechanical engineering, robotics, propulsion, advanced weaponry, computer hacking and programming, holographic technology, electronics and much more.

He had built highly durable and diverse machines including the Earthbreaker, the Crab ship, the Deep Ocean Surveyor and the Antlion vehicles. He also often kept a suite of drones, which he called Mechas, with him at all times, usually to serve as security or support for his bases or larger vehicles. The Mechanic had been in the Hood's employ for a long time, having provided him with the holographic technology the Hood uses to disguise himself. His machines were so exceptionally well-designed and well-built that they impress even Brains, who had almost single-handedly designed and built all the Thunderbird crafts that are so coveted by The Hood.

He was a highly skilled pilot, able to expertly control many of his vehicles via a holographic heads-up display, be it remotely or in person.

The Mechanic was also an adept planner and strategist, having managed to evade capture multiple times and formulated complex plans to further his or his employer's goals.

The Mechanic always seems to have had vast amounts of money and resources to use in his schemes, such as XN Industrial, a company he set up as a front in his plan to acquire the TV-21. He also had a large network of well defended secret bases, hideouts, laboratories and workshops around the world from which he formulated his various plans and built new machines and weapons.

The Mechanic is in control of a giant earth breaking machine that is splitting open the ground to get at the natural reserves of Scandium ore. After attacking both the GDF and International Rescue, The Mechanic's plans are brought to a halt by Kayo unplugging some of the vital cables that control the machine. The Mechanic flees the scene in Magna Prime, evading capture and blowing up his sinister invention behind him in the process.

Home on the Range

When the team realise there is an intruder, Kayo, Lady Penelope and Parker check it out. Brains later downloads EOS to the Ranch's system, to do a scan and much more. Brains later checks out the server room, only to find The Mechanic is there. When Grandma comes to see what's going on, Brains sends her a message with the help of EOS. Grandma disconnects the Mechanic and Brains is nearly electrocuted with a scorpion Mecha, however MAX dismantled the Scorpion Mecha. Grandma then turns the corner and later John comes along. EOS breaks The Mechanic's Power Suit, which means he can no longer use it to control his Mecha. He then makes a run for it and escapes in Magna Prime.

The Mechanic completes Project Sentinel and attempts to kill The Hood. International Rescue scramble to save him, which they manage to in the end. When Brains and MAX visits the Sentinel they discover that he is not remotely controlling it. Brains manages to turn off the Sentinel, with MAX holding back some scorpion Mechas. John then warns him the Sentinel is still charging and it's going to blow any moment, so he saves The Mechanic and they escape in the Space Elevator. They arrive back on Earth and the GDF arrest him. 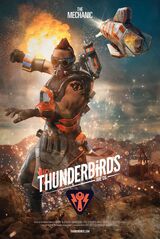 An unmasked Mechanic during his GDF imprisonment