The Hood is the main villain from the live-action Thunderbirds movie released in 2004. His real name is Trangh Belagant.

Portrayed by Sir Ben Kingsley, The Hood, using a special locator slime, discovered the location of Tracy Island, and he trapped Jeff Tracy and the four eldest brothers on Thunderbird 5 with a missile attack. He subsequently proceeded to steal Thunderbird 2 and the Mole, hoping to use them in a series of bank robberies, starting with the Bank of London. He possessed powerful telekinetic abilities, although over-use of this power weakened him. His niece Tintin inherited these abilities.

It was revealed during the film that these powers were greatly enhanced when the Hood was left for dead during one of International Rescue's first missions; the Hood accuses Jeff Tracy of leaving him to die, but Jeff later tells his son Alan that, at the time, he left the Hood because he could see no way to save him that wouldn't kill them both.

Despite what the Hood had done to him and his family, when Alan had the chance to let the Hood fall into the Mole's drilling mechanism, he still decided to save his life.

Two of The Hood's most important henchmen in the film were Transom and Mullion (the brains and muscle of his operation respectively). There are at least four other gang members that feature in the movie , one of whom is female. 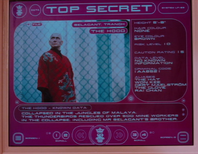