"Oh no! Virgil! We brought the wrong box!"
— Brains

The retro rockets fail on a manned mission to retrieve matter from a solar prominence, putting the spaceship on collision course with the Sun. Thunderbird 3 and Thunderbird 2 are sent on a dual mission to transmit a radio signal that will remotely activate the Sun Probe's retros. 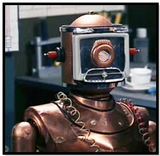