"Space Warriors" is the fifth episode of Thunderbirds 2086, and sixteenth produced overall. The episode first aired in Japan on August 28, 1982.

Having assisted in capturing a group of rogue bandits, Space Patrol is eager for Dylan Beyda to join their cause. The bandit leader, Ricky, subsequently escapes his prison, leading to a one-on-one showdown between the young men. 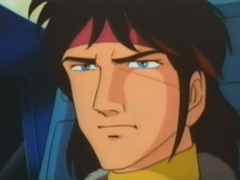