Thunderbird 6
Skyship One is a large, technologically advanced airship featured in Thunderbird 6. The airship was designed by Brains and commissioned by the New World Aircraft Corporation. The airship is completely automated, including stopovers, which are pre-programmed before take-off. As a result, only a skeleton crew is required as security. Key to the airship's design are gravity compensators which allow the airship to become airborne by greatly reducing its weight. Skyship One also has several luxuriously themed rooms and facilities.

Side view of Skyship One

Skyship One gets stuck on the tower 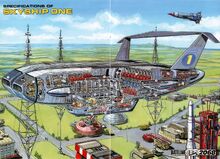