Thunderbirds Wiki
Register
Don't have an account?
Sign In
Advertisement
in: Pets, Lady Penelope, Thunderbirds Are Go! Characters,
and 11 more

Sherbet (occasionally spelt as Sherbert; also known as Bertie) is a pug, appearing in Thunderbirds Are Go! - and one with a claim to fame too, as Lady Penelope's companion on her travels.

Sherbet is a very intelligent pug, capable of reading situations and taking commands almost as much as a human; for example, covering his ears when a sonic wave is about to be blasted in their way in Weather or Not, and stealing the mission-critical digi-key in Clean Sweep. He is also very brave, as while he is seen to be in distress on and off during missions, he rarely panics. Instead, he is always trying to be of help, be it by playing cute and cuddly to distract targets, or acting hostile and unapproachable to help fend off undesirables.

For reasons unknown, Sherbet doesn't seem to get along with Parker, always finding one way or another to annoy the chauffeur. But they nonetheless do appear to team up as partners during several rescues (Clean Sweep, The Man From TB5 and Rigged for Disaster) when the situations calls for it, working just fine with one another despite their mutual dislike for each other.

Sherbet, like his owner, likes drinking tea - specifically with two cubes of sugar in one cup - as seen in Up from the Depths Part 1, with Lady Penelope reminding Parker to serve both of them. 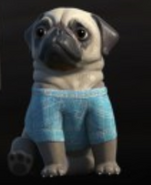