Security Robots are humanoid robots used to guard buildings. Some are used by military forces in places like arms factories and storage facilities, but the majority of them are used by civilian organisations in places like factories, power plants, and warehouses. Although impervious to most forms of attack, these robots can be disabled by tuning ray guns to the right frequencies. The robots capture intruders by putting their arms around them from behind, very similar to a bear hug. The robot will then restrain the person until the prisoner release program is activated.

Security robots have a Cahelium-strengthened skeleton frame inside of their copper-coloured extremely tough outer casing, which helps when restraining intruders. On the top of their head is a visual infra-red and night vision sensor, and also an 360° all-round proximity sensor to stop them from bumping into objects. Inside their heads, working alongside the visual infra-red and night vision sensor, is a 3-D visual sensor unit the lens of which has a shield around it for protection. Below this is the LCD screen to display their identification number and systems diagnostic information. Behind this is the sensory interpretation and relay unit for sending and receiving information to and from its central computer. On either side of its head is an audio sensor for picking up atmospheric and sound vibration made by intruders, and automatically ignores the other security robots' movement. In the neck is a joint that allows their head to turn 360°. On its back are two antennae that, if needed, relay audio-visual and computer information from its central computer to the control room. Bolts on the upper torso are capable of being taken off, giving access to its removable central computer. In its torso is the central computer which automatically operates the systems, and relays information to the twin antennae, so it can then be relayed to the control room. Below the central computer is micro fusion power unit which has a protection shield. Below this is a gyroscope which works in conjunction with the central computer and makes sure their balance is sustained. Below this is the computer-controlled leg joint coordination unit which makes sure that running and walking operations are kept as smooth as possible. Either side of this is a servo motor for the leg it is on the same side as. Protruding out the end of their left arm between the two pincers is a laser gun, with its power cell located just inside next to the laser gun's end. In the skeleton frame of each leg are auxiliary power batteries, and in its feet are computer-controlled switchable electric magnets to help it balance on metallic floors at all times.

In the episode 30 Minutes After Noon, The Plutonium Store is guarded by security robots. The store was infiltrated by Kenyon, Dempsey, and Southern, who was in fact an undercover agent to reveal the Erdman gang's next plan to his superior, Sir William Frazer. The plan goes as scheduled, but on arrival in the storeroom Southern disable the guards with a Ray Machine then pulls a gun on the other two men, unfortunately for Southern, he is attacked by a guard robot which has not been disabled and, held in its steel arms, he is helpless as Dempsey and Kenyon escape, trapping him in the storeroom with their bracelets. Southern uses his radio pen to contact his boss, Sir William Frazer, who calls International Rescue. 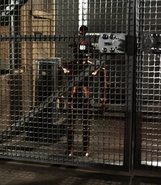 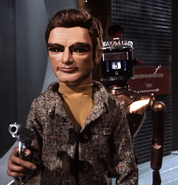 Security Robot No.5 sneaks up behind Southern
Add a photo to this gallery

As far as is known, only one cutaway drawing of the security robot exists. Illustrated by Graham Bleathman, it appeared in a Thunderbirds Redan comic.

Braman
Add a photo to this gallery
Retrieved from "https://thunderbirds.fandom.com/wiki/Security_Robot?oldid=102650"
Community content is available under CC-BY-SA unless otherwise noted.