Seascape was a gas and oil drilling rig/platform in the Northern Atlantic Ocean and was seen in Atlantic Inferno.

Seascape was capable of increasing its height in adverse weather conditions. It relied on a gas turbine for power.

One of the six supporting legs

Six kellys; one for each support column.

Note: A Kelly is a type of well drilling device.

Seascape had at least one helipad, which Thunderbird 1 landed on in the episode.

Seascape had a Radiographic scanner as well as other instruments in the main control.

Stabilizing was achieved with anchors for each support column; deployed in stormy weather.

Six deep diving and observation spheres that the crew can use for going underwater for maintenance checkups.

One of the six Kellys

Thunderbird 1 lands on the Helipad

The diving bell being lowered

Frank Hooper was the superintendent, with crewmen Dick O'Shea and Cravitz. 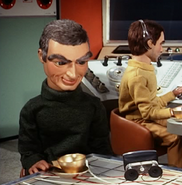 Rescue Of The Crew

The World Navy were testing gyropedoes in the Atlantic Ocean near the drilling rig, when one of the gyropedoes (fired from the atom sub W.N.S. Reaper) ignites a gas field beneath the sea bed. The gas eventually breaks through, shooting columns of flames above sea level and high into the air. Feeling themselves in danger, Hooper and O'Shea go down in a diving bell to check the damage, after one of the drilling rig's legs is fractured. A further explosion causes the rig to slip further and the diving bell crashes to the sea bed. They are rescued by Gordon in Thunderbird 4 and just manage to get clear as the rig explodes in flames.

Hooper and O'Shea go down in the diving bell

The rig slips further down into the sea

The rig explodes in flames

Only one cutaway of the Seascape is known to exist. This featured in Redan Thunderbirds Comics, and was illustrated by Graham Bleathman.