"Dad's desk. I guess in a way, he's still looking out for us."
— Virgil Tracy

"Ring of Fire Part 1" was the premier episode of Thunderbirds Are Go!, and sixth produced overall. The episode made its public debut at the BFI Southbank event in London on March 31st 2015 at 4PM, bundled with Ring of Fire Part 2. It is the first instalment of a 2-part adventure.

A series of underwater sea quakes along the ocean floor cause a research team to become trapped in their sea lab that perilously sits near the edge of an underwater cliff. It’s up to Scott, Virgil and Gordon to rescue and bring the research team to the surface, but before doing so Gordon discovers a device which turns out to be one of several seismic destabilises which have been left at the bottom of the ocean while following a signal which he hoped belong to their father who is 'missing in action'.

With the help of Lady Penelope, they discover that the devices causing the quakes have been created by their organisation's biggest enemy, The Hood. 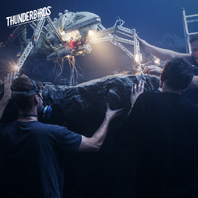 John tracks the Father in Balloon

Virgil getting ready to sky jump

Virgil landing back inside TB2 from the skydrop

TB3 preparing to lock onto the satellite

Kayo along for the ride with Alan

Lady Penelope talking to Scott on her com

"He always did take her side."

Chaos inside Sea Lab 1 as it shifts around

"My squid sense is tingling"

Ready to suit up

TB1 struggles to stay above the ocean with, Sea Lab 1 on a cable below

Virgil still trying to attach the cables from TB2

Gordon finally comes to after being out cold

Gordon goes to retrieve the transmitter

"Pretty sure that's another quake"

"Lady Penelope, can you do me a favour?"

Both TB1 & 2 struggling to hold onto Sea Lab

Returning to retrieve the last scientist

Gordon gets knocked out again as the Lab shifts

Everyone is waiting on Gordon finishing

Dry tube retrieval back in the TB2 pod bay

Lady Penelope has some information

"What's the worst that could happen?"

John watches the signals all drop into darkness

Woah, hold on a minute!?

A "reference" to Stingray