"Rigged for Disaster" is the 24th episode of Thunderbirds Are Go! season 2. It was broadcast on the 2nd of December, 2017 in the UK.

Lady Penelope, Parker and Kayo arrive on the scene of a massive semi-submersible ocean oil rig to convert it to a solar plant, but supervisor Malloy has other plans.

Lady Penelope: "I'm going to remain on board and keep the pipe safe. As they say, the owner always goes down with the rig."
Doyle: "I don't think anyone says that."
Lady Penelope: "Well they should."

Parker: "M'lady, I've every faith in you, but that new EVA suit hasn't been tested."
Lady Penelope: "And I can't think of a better time to try it. Who knew Brains has such an eye for fashion?"

Parker: "M'lady, are you all right?"
Lady Penelope: "Thankfully, I am. You may not drive everything correctly, Parker, but your FAB 1 skills remain superb."
Parker: "Oh, she's making me blush!" 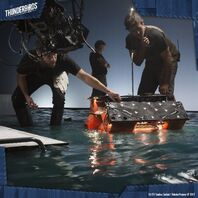 "Who'd be crazy enough to come out here?"

"Here's the contract to prove it."

"I've just become the owner of this oil rig."

"I'm converting this rig into a solar plant."

"Someone's gone off the edge."

"They pushed me off the railing before I could warn you."

"The foam is limited, so make your shots count."

"Aim for the base of the fire!"

"International Rescue, it's Kayo, we have a situation."

"I'm sending you schematics of the rig's current state."

"I'll pull up the schematic on my screen."

"Not bad for your first day on the job."

"Well, this is rather distressing..."

"We'll feel a lot better once we're out of this rotten rig."

"For the first time ever, I'm proud of the work we did here today."