"Ricochet" is the fifth episode of Thunderbirds season 2, first broadcast on 6th November 1966. It would be the last regularly aired episode of season 2 in the UK, and thus the classic Thunderbirds series entirely, as the following episode Give or Take a Million would be held back until Christmas. Some foreign markets, including Japan, would disregard this directive and air it earlier. The feature film Thunderbirds Are Go would appear next, in mid-December, having been produced alongside the season.

A two-man pirate-television satellite - KLA - is knocked out of orbit when a faulty rocket explodes in its vicinity. Alan rescues one of the crew, but the presenter, Rick O'Shea, refuses to perform a space walk to Thunderbird 3. Virgil and Brains, in Thunderbird 2, must destroy the KLA satellite before it crashes into a Middle-Eastern oil refinery - whether or not O'Shea is still aboard. 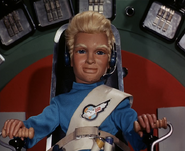