Professor Borender is a scientist who helped develop a revolutionary new rocket fuel, made from sea water.

He and his fellow scientist and project collaborator, Sir Jeremy Hodge, both appear in The Perils of Penelope. 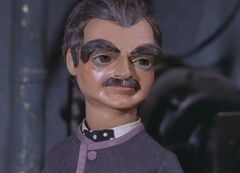 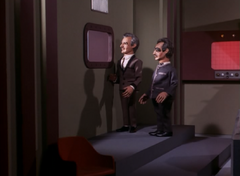 Unknown to Professor Borender, his friend Sir Jeremy is also an agent for International Rescue; and when Borender inexplicably goes missing during a railway trip to Anderbad, Sir Jeremy enlists the aid of fellow IR agent Lady Penelope Creighton-Ward, to help find him.

Both agents are subsequently kidnapped by Doctor Godber, who used the Anderbad Tunnel Control (with the aid of his accomplice Roache) to stop the monotrain they were travelling on and, at gunpoint, remove them elsewhere. Borender had been previously kidnapped the same way, a few days earlier; and the two scientists are now reunited, albeit in captivity. Their abductor Godber's aim is to force Sir Jeremy and Borender to reveal the secret process behind their new rocket fuel; and he now has just the means to do so. He has a hostage....

By now, International Rescue itself has become involved; as Thunderbird 2 - with Virgil, Alan and Gordon Tracy aboard - arrives at Anderbad, meeting up with Parker in FAB 1. Realizing that Lady Penelope has gone missing, Virgil and Gordon Tracy set off into the tunnel on the Monobrake. As the Anderbad Express approaches, the two brothers discover Godber's hideout. A gunfight ensues, and both Borender and Sir Jeremy are rescued - but the control panel in the sub-station is destroyed, and the train can't be stopped! Virgil sharp-shoots the rope which holds Penelope in place, and she falls out of the path of the train - just as it comes hurtling through the tunnel. 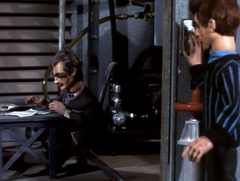 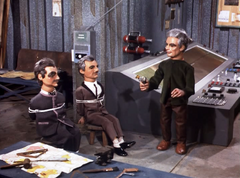 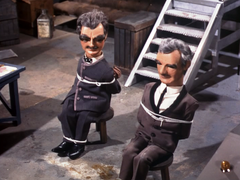 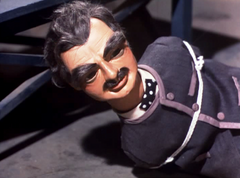 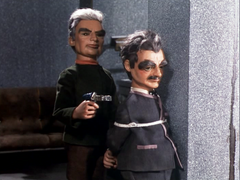 In 30 Minutes After Noon

In The Duchess Assignment