Popy was a Japanese toy manufacturer owned by Bandai. It was founded in 1971.

Popinika toys, which were based on vehicles from lines Popy had licensed (which included Thunderbirds), released for sale in 1974, a range of six die-cast models based on the Thunderbirds craft, including the Mole (called a "Jet Mogura" in Japan). Sold in boxes with colourful artwork the craft themselves didn't quit match a true likeness, having incorrect livery. The company repackaged and re-issued in 1979, with production finally ending in 1984 with the release of a Thunderbird big base.

Despite there poor likeness to the original Thunderbird craft, these die-cast models fetch a high price when offered for sale. The toy in mint condition, in its original box, can fetch as much as £600 at auction.

Notes: the differences to the 1979 release was the blue was a lighter colour and no red strips on the wings. The box was a totally redesigned.

1979 issue (light blue body)
Add a photo to this gallery

Three different Thunderbird 2s were released between 1974 and 1984.

Notes: The 1979 issue has no IR logo above the "2", now positioned on the sides and windows are black, not white. The small (30mm) Thunderbird 4 and 34mm Mole are chrome. The top section of the craft has a spring-loaded roof hatch (see photos) which can be opened to reveal a pop-up missile launcher, which fires two yellow plastic missiles. Also includes red plastic folding legs. 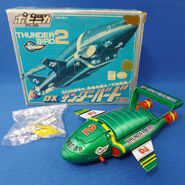 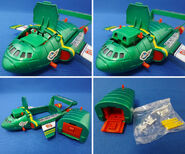 Notes: Telescopic chrome legs with small wheels attached. Pod can be lowered to eject a Thunderbird 4 or a Mole via spring-loaded mechanism. The side section can be slid out to reveal two IR characters.

Die-cast metal with plastic parts. By turning the chromed centre fin section it will release the spring-loaded plastic nose cone.

Notes: No logo, and arms now in white plastic. 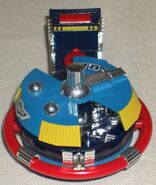 Die-cast metal and plastic parts. The drill section can be turned manually from the rear section, and moves independently on four metal wheels. Metal wheels are also hidden beneath the fixed track on the tractor section. A slide-out chromed ramp at the front allows the Mole to leave the tractor vehicle.

Note: The only difference from the 1974 issues was the box.

Retrieved from "https://thunderbirds.fandom.com/wiki/Popy_Die-cast_Toys?oldid=100716"
Community content is available under CC-BY-SA unless otherwise noted.