Thunderbirds Wiki
Register
Don't have an account?
Sign In
Advertisement
in: Season 1, Episodes, Pit of Peril,
and 2 more

"Two brave men have been badly injured in that pit. I don't know if I should risk another life."
— General Peters

"Pit of Peril" is the second episode of Thunderbirds season 1. It first aired on 7th October 1965.

An accident causes an enormous, and unwieldy, US Army prototype vehicle to topple into a burning landfill, helpless to extricate itself. Only International Rescue is capable of transporting the equipment required to rescue the crew trapped inside, before they die of heat exposure.

During the field-testing of a revolutionary new Army transport vehicle, the Sidewinder, it literally runs into trouble - abruptly disappearing beneath the ground, along with its crew. International Rescue is called; and with men's lives at stake, a highly ingenious - and dangerous - operation, devised on-site by Brains, must be executed perfectly... 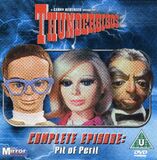