Paul Maxwell (12 November 1921 – 19 December 1991) was a Canadian actor who worked mostly in British cinema and television.

In the 1960s, Maxwell appeared in many TV series produced by ITC Entertainment, such as Danger Man and The Baron. He also voiced North American characters in series filmed by Gerry Anderson's production company Century 21, most prominently the leading character of Colonel Steve Zodiac in Fireball XL5 (1962) and the supporting character of Captain Grey in Captain Scarlet and the Mysterons (1967).

His voice appears in only one episode of the television series Thunderbirds: in Alias Mr. Hackenbacker, he voiced Captain Ashton and a news reporter. He was not given credit for either of these roles.

In the movie Thunderbirds Are Go, he voiced Captain Paul Travers. 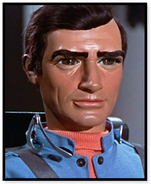