The front of the ship has an anchor on its starboard side, at least one towing cleat, and a cargo pump-room with a large, four-pronged communication antenna on top. This antenna is also supported by several cables. Underneath the cargo pump-room is the tank maintenance access gangway.

The middle of the ship has a number of tanks for storing either alsterene or oil, as well as a maintenance gangway.

Abaft, there is a two-storey superstructure. The first storey has living accommodation for the crewmen as well as a cabin for the captain. The first storey extends to the end of the ship, just below an orange helipad. The second storey houses the control room. Underneath the bridge is the atomic reactor and the steam turbine power plant. 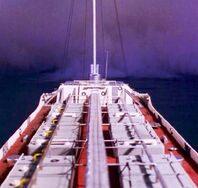 A view from Ocean Pioneer's bridge. Note the six tanks used for transporting oil and alsterene and the central maintenance gangplank

A typical layout of a bridge

Only one cutaway drawing of the Ocean Pioneer class tankers is known to exist. It featured in Redan Thunderbirds Comics, and was illustrated by Graham Bleathman. 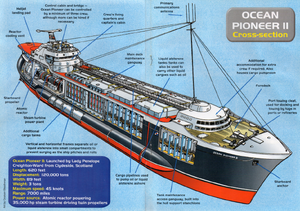 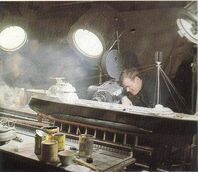 The smaller Ocean Pioneer model in its present state 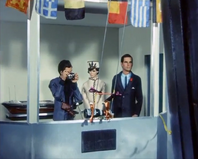 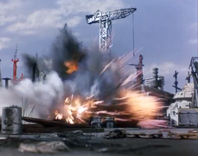 Note the ship still has its O.P. marking
Community content is available under CC-BY-SA unless otherwise noted.
Advertisement