In the 2004 film Thunderbirds, Mullion is the man hired by The Hood to serve as the muscle behind his plans. He was played by actor DeObia Oparei.

Mullion may not have any academic qualifications, but he is a skilled martial artist, well trained in Judo, Krav Maga and Tae Kwon Do. He is a very strong and intimidating man with a high pain tolerance. He was able to carry both Fermat and Tin-Tin at the same time, and totally intimidated Brains when he physically moved him around the room and shoved him down off the couch inside the Tracy Island control room. He also was able to recover as fit as a fiddle and continue fighting when Parker hit him in the face with a frying pan.

While loyal to The Hood, he sometimes speaks without thinking, for example when he asks The Hood if he should target Tracy Island instead of capturing it, and again when he questions his methods of robbing banks. On both occasions, The Hood used his psychic powers to put Mullion back in his place.

Incognito at the oil rig 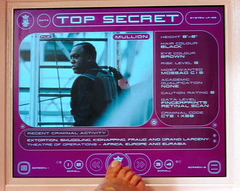 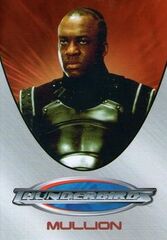