Chip Morrison and his dad live in a house in England, close to a mine.

When the mine catches fire, International Rescue are called, and a inquisitive young Chip is able to get aboard Thunderbird 2, causing a security hazard when the craft arrives back at base.

After a tour of the island a tired Chip falls asleep, allowing Scott and Virgil Tracy the time to fly him back to his house so when he wakes he thinks its all been a dream. 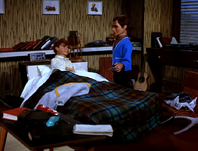 Chip in his bedroom

Dad leaves for the mine

Chip stares out his bedroom window at Thunderbird 2

The craft left close to the house 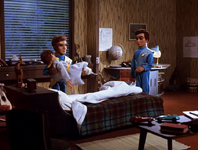 Scott and Virgil puts a sleeping Chip back in his bed 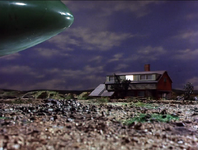