The Mobile Crane is a red six-wheeled pod vehicle stored in Pod 3. It is used to reach hard-to-get-to places. Its elevated platform unit can reach heights of up to about 50 feet. It incorporates a gyroscopic stabiliser. This enables the crane platform to remain level regardless of the stanchions' height or angle. The wheels are about the height of a fully-grown human, if not taller.

The cabin holds a central-positioned driver's console that is ergonomically simplified so it's easy to use. The cabin has a radio microphone for communication purposes. When the mobile platform unit is not in use, the support beam lowers down and the mobile platform unit rests on the roof of the vehicle, just behind the cabin. Behind the seats in the cabin is an access door that leads to the mobile platform unit. There are also steps on the right side of the vehicle that lead down to the ground. Just to the left side of the cabin is a grille for the purpose of air intake and is built to filter dust and debris. A few feet behind the grille is a searchlight for when the Mobile Crane is used in dark environments. At the rear of the Mobile Crane are ducts and outlet filters used for exhaust purposes.

The Mobile Crane only appears in Path Of Destruction.

When the crew of Crablogger suddenly becomes incapacitated - and the enormous tree-felling machine goes on a path of destruction - the Mobile Crane is needed to help stop it; and it's transported to the danger zone by International Rescue, aboard Thunderbird 2.

On arrival, Scott then drives the vehicle out of Pod 3 and, with Brains and Virgil, races at full-speed to overtake Crablogger, still barrelling along, out of control - and headed towards the San Martino Dam. Once alongside, Scott then lifts his two passengers up onto Crablogger's roof...

The chase is on

A rear view of the Mobile crane

Scott at the controls

Catching up with the Crablogger

Brains gets a hand

Very little in the way of collectables has been produced featuring the Mobile Crane. Bandai, of Japan, released a small version under their Hot Wheels collection in 2003, and it featured once on a Somportex bubble gum card in 1966.

The Mobile Crane is produced as part of the 'Build your own Thunderbird 2' by Deagostini. 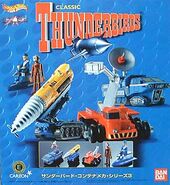 Only two cutaways of the Mobile Crane are known to exist. The first featured in issue 50 of Redan’s Thunderbirds comic, and the other appeared in the Haynes Thunderbirds manual. Both were illustrated by Graham Bleathman.