The make-up girl is a member of director Goldheimer's film crew, in Martian Invasion.

On location in the Nevada desert, producer Bletcher's team is shooting the science-fiction film Martian Invasion.

While the production crew is setting up the next scenes to be filmed, the make-up girl is attending to the alien make-ups of actors Pete and Ray, who portray two Martians who've just landed on Earth...

Ray is expounding on the current state of his acting career (such as it is), as she listens; each time he pauses for breath, she laconically responds, "So, what did he say?"

But his answer is never truly forthcoming; for at that moment, the actors - Ray and Pete, along with Maguire and Slim, who play police officers in the wrong place, at the wrong time - are called back to the set, as filming resumes... 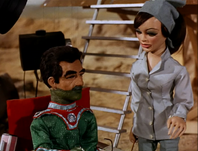 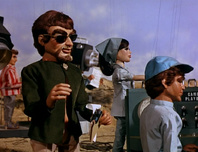 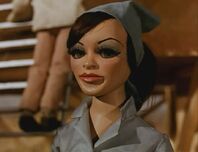 In Thunderbird 6
Community content is available under CC-BY-SA unless otherwise noted.
Advertisement