"Lost Kingdom" is the eight episode of the second season of Thunderbirds Are Go!, which was broadcast on December 3, 2016.

After a seaquake near the coast of Greece reveals the lost city of Atlantis, Francois Lemaire ignores International Rescue's warning about aftershocks and with his wife, Madeline, venture below the depths to explore the area. When their submarine becomes stuck, Virgil and Gordon are called to assist. Brains and MAX go with them so that they could see the Solar Kythera, an ancient device used to view the stars.

John: "I strongly advise to leave as fast as you can."
Francois: "What is this, the International Rescue Babysitting Service? I'm well aware of my location, thank you."

Brains: "But I never said he was c-crazy. I said, it's crazy."
Gordon: "I'll tell you what's crazy, Brains. Us chasing Lemaire into an active quake zone."

Francois: "Could you get a wiggle on delivering me back to Madeline? I need to start her planning my publicity. I'm going on an 'I Proved Mer People Exist' tour."
[Brains groans]
Gordon: "Snappy title." 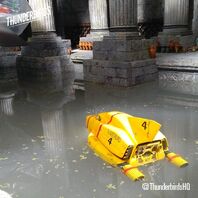 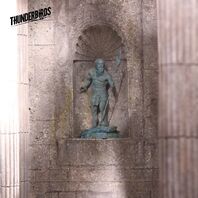