Employee at the Bank of England

"International Rescue? I knew you were highly efficient but this is ridiculous!"

Lambert is an accountant, employed by the Bank of England. He's something of a workaholic, too; once set upon a task, he won't cease until it's completed - no matter whatever. Observes his colleague, Lovegrove, "His concentration is quite terrifying..."

So much so, in fact, that when he accidentally gets locked inside the bank's new vault one day, he has no idea as to just how terrifying his situation will become...until it's all but too late...

Voiced by David Graham, Lambert appears in Vault of Death. 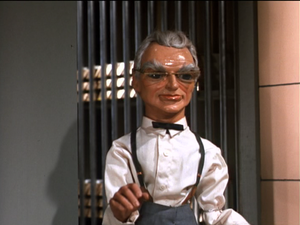 Once Lambert finally realizes he can't get out of the locked vault...and the air inside it is rapidly being sucked out...he tries to call International Rescue...and is well and truly startled, when Virgil and Alan Tracy just then blast open the vault door to reach him! 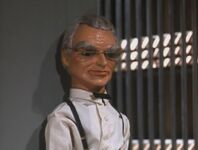 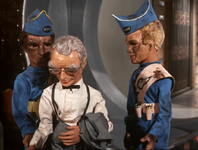 In Move - And You're Dead

The gambler in
The Duchess Assignment

The passenger in
The Duchess Assignment

In The Impostors
Community content is available under CC-BY-SA unless otherwise noted.
Advertisement