Trapped in the Sky
The Perils of Penelope
Day of Disaster
30 Minutes After Noon
Vault Of Death
The Mighty Atom
The Impostors
The Man From MI.5
Danger At Ocean Deep
The Duchess Assignment
Brink of Disaster
The Cham-Cham
Security Hazard
Atlantic Inferno
Path Of Destruction
Alias Mr. Hackenbacker
Lord Parker's 'Oliday
Give or Take a Million
Thunderbirds Are Go
Thunderbird 6

Lady Penelope Creighton-Ward is the daring London Agent of International Rescue, as well as a renowned aristocrat, socialite, and model.

Lady Penelope was born on Christmas Eve to Lord Hugh and Lady Amelia Creighton-Ward. She spent her initial years with her parents at the Creighton-Ward Mansion. She moved to India along with her parents, her father having been posted there by the British government to oversee the production of tea. Penelope herself, however, suffered in the harsh climate, and was sent home on her own, being placed in the charge of a governess by the name of Miss Pemberton, whom she was particularly fond of.

Her schooling began at the illustrious Roedean School, an independent day and boarding school for girls aged 11 to 18. There she excelled academically, made firm, lifelong friendships, and was appointed head girl in her final year.

Having completed her education at Roedean, she attended finishing school in Switzerland. There she became an accomplished skier, but more impressively also developed her knowledge of French, German and Italian, speaking all three flawlessly.

Lady Penelope decided, following her education, that she did not want to spend her life as a socialite, attending the functions that members of the aristocracy are traditionally expected to attend. Instead, capitalising on her linguistic skills, she entered the field of espionage, quickly progressing to become chief operative of the Federal Agents Bureau. It was whilst in this position that she met Jeff Tracy. Jeff went on to offer her a position within International Rescue, which Penelope accepted immediately.

Lady Penelope became a key operative for International Rescue, playing a vital role in many a rescue mission. Her particular skills lie in subterfuge, regularly fooling unwitting villains and bystanders alike into revealing to her key information. However, she can hold her own when needed, being a skilled user of hand-held guns.

Despite these skills, given that she places herself in very direct danger, Lady Penelope has previously been captured and threatened by criminals and required rescuing herself by her colleagues. She has also been proven to be an extremely poor driver, as demonstrated in "Vault Of Death," when she decides to drive herself to the Bank of England to rescue a man trapped in the vault and in danger of being suffocated, and Parker is driving incredibly slowly (so as to avoid his old cellmate, Light-Fingered Fred, who has recently broken out of prison). Upon taking over, she drives extremely erratically, almost making Parker vomit. However, in "Brink of Disaster," she is shown to be highly confident behind the wheel, shooting and presumably killing the crook with machine gun using FAB 1's rear armaments. 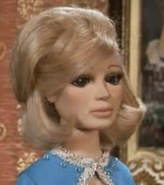 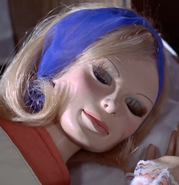 "Blinker"
("The Perils of Penelope") 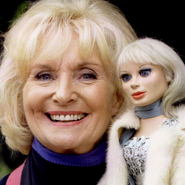 The "blinker" head still exists today, though it has lost its eyelids.
Sylvia Anderson is shown with it.

Trapped in the Sky, The Perils of Penelope, Day of Disaster, 30 Minutes After Noon, Vault Of Death, The Mighty Atom, The Impostors, The Man From MI.5, Danger At Ocean Deep, The Duchess Assignment, Brink of Disaster, The Cham-Cham, Security Hazard, Atlantic Inferno, Path Of Destruction, Alias Mr. Hackenbacker, Lord Parker's 'Oliday and Give or Take a Million.

Lady Penelope appears in both films, Thunderbirds are Go and Thunderbird 6.

She also appears in all 3 Thunderbirds 1965 episodes, The Abominable Snowman,Introducing Thunderbirds and The Stately Homes Robberies