"I always have the honour to serve in this household."

Kyrano is the household manager for International Rescue, at its secret base on Tracy Island. He is the father of Tin-Tin, who resides with him at the Tracy Villa.

And he's also the half-brother of The Hood - the main antagonist of the Thunderbirds TV series.

Kyrano has long been a friend of Jeff Tracy, who is grateful for Kyrano's great loyalty. Both men are fathers, and widowers; and their six grown children (between them) make for a unique "combined" family.

Kyrano is a proud manservant to the Tracys, not allowing anyone to get in his way.

But a shadow perpetually follows him. From his distant hidden temple - standing before a Voodoo statue in his half-brother's image - the Hood exerted a mysterious power over him...sending Kyrano collapsing to the floor in agony, overcome by a massive panic attack...

Afterwards, however, it appeared that he retained no conscious knowledge of these psychic assaults; as he always passed them off as mere 'dizzy spells' - despite his otherwise-unquestionable loyalty to Jeff.

Kyrano appears in Trapped in the Sky, Terror in New York City, Desperate Intruder, End Of The Road, Sun Probe, The Mighty Atom, Danger At Ocean Deep, Martian Invasion, and Give or Take a Million.

He also appeared in Vault of Death, but had no spoken lines. 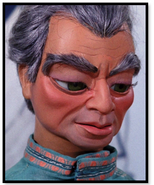 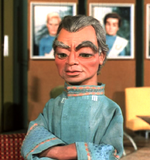 Kyrano's new puppet in
Give or Take a Million

In Give or Take a Million