Head of Security and Covert Operations

"Spoiling your plans is the best part of my job."

Tanusha "Kayo" Kyrano serves as chief of security and Covert Ops for International Rescue. She's also the pilot of Thunderbird Shadow. And, as an expert in the Wing Chun form of kung fu, she's a force to be reckoned with....

Kayo’s signature colour for her iR uniform is black.

Kayo appears in Thunderbirds Are Go!.

Kayo was born in England to Mr. Kyrano and an unknown mother. At some point, she was taken in by Jeff Tracy, and raised on Tracy Island. Her father, was a close friend to Jeff, asked him to take on his daughter and to allow her to live on Tracy Island with him and his family.

She grew up alongside Jeff's five sons and with their caregiver, Grandma Tracy. While not a Tracy by blood, she's treated as a sister by the boys, and a member of the family.

Kayo's much more than a pretty face: she's an integral member of the IR team, and serves a variety of roles usually attributed to someone of older age - in particular, her position as chief of security, a role she inherited from her father. When not participating in stealth missions in her own personal Thunderbird craft, she has been seen training the Tracy brothers in self defense, specifically Wing Chun.

Kayo believes that there's more to International Rescue than just saving lives: she reckons that disasters should be prevented before they can happen; whereas Scott believes that International Rescue only gets involved where there is a current situation. Kayo's stubbornness sees her defying orders on a regular basis - whether it be making contact with villains in Thunderbird Shadow, or straying off to catch the people behind global disasters. This results in her clashing with Scott now and then, but Scott yielded nonetheless seeing her effectiveness at doing so. She goes on quite a few missions with Alan, which she refers to as "babysitting" (Ring of Fire Part 1), although she does volunteer to go with him in Slingshot.

Like her five adopted brothers, despite being assigned her own Thunderbird craft, she has the basics for handling any of the Thunderbirds she gets her hands on. As seen in City Under the Sea, despite not being usually assigned on underwater missions (given her role, she hardly needs to), she's very capable of piloting Thunderbird 4 on her own - even pulling moves Gordon never knew the submarine was capable of - suggesting that, between the two of them, she might actually be the better pilot of the craft!

Kayo has the least amount of appearances; however she does tag along on quite a lot of missions with Alan, and has some solo time when they're in need of someone who can perform a job incognito.

Kayo's flying from England to Australia on the hypersonic plane, the Fireflash, when it's hijacked by The Hood. After confronting him (and his inevitable escape), Kayo has to try and land the plane with a leaking tank of fuel, and no landing gear, in the middle of the desert...

After arriving at the CATCH facility, Kayo discovers the Hood had disabled the flight navigation system so he could preform an elaborate heist of liquid alsterene. She then chases after him, to try and recover the stolen fuel...

After realising they'd all been set up, Kayo makes a dash back to Tracy Island - to find an unwelcome guest who wishes to take the island, and the Thunderbirds, for himself. She then tricks the Hood, by taking him to Mateo Island - and, for a brief moment, letting him think he has control over all the Thunderbird craft... 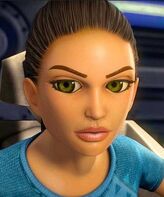