"We have our first emergency call..."

He's the quiet one, usually; but, when he speaks - look out. There's an emergency, somewhere in the world; and the appeal has gone out: "Calling International Rescue..."

Answering that call for help - from aboard Thunderbird 5, IR's orbital listening post - is space monitor John Tracy, the third (or second?) of Jeff Tracy's five sons.

John's signature colour on his IR uniform is lilac.

John was named by his parents after Mercury 7 astronaut John Glenn.

He was educated at Harvard and decided to follow in his father's footsteps of becoming an astronaut, before joining International Rescue.

As space monitor aboard TB5, John has the most important task of relaying received calls for help back down to IR headquarters at Tracy Island, on Earth. As IR's "gatekeeper," he can expect to hear just about anything - from lost boys, to secret agents, and even (wait for it) giant alligators!

John is also very fond of astronomy, and has had several textbooks that he's written and published. With the aid of TB 5's state-of-the-art telescope, he actively observes and photographs the heavens...and his incessant space-searching led to the discovery of the Tracy quasar system.

John is the quietest and most intellectual of Jeff's sons, slighter in build than his elder brother Scott and younger brothers Virgil, Gordon and Alan. He is also tremendously lithe, sharp-minded, has a lot of mental energy, and is graceful. He's all as desirous of action as his brothers - and sometimes gets frustrated with his duties aboard TB5, because he's unable to take part in as many rescue missions as they do. While John may appear to act over-enthusiastically when dealing with emergencies ("Wow-wee, that's serious!"), he's very quick at assessing a situation, proving invaluable when dealing with distress calls. However, when required to, John can successfully pull off a rescue just as well as the others can, showing that he is a very versatile member of the team.

Although John is the primary space monitor aboard TB5, he regularly changes shifts with Alan (and, occasionally, with Scott) every other month.

While home on leave, on Tracy Island, John is available to take part in rescue missions on Earth - as he does in Danger At Ocean Deep, where he and Virgil team up with Scott for the crew rescue from the stricken tanker Ocean Pioneer II.

John appears in twenty-four TV episodes: Trapped in the Sky, Pit of Peril, City of Fire, The Uninvited, Vault Of Death, The Mighty Atom, Operation Crash-Dive, Martian Invasion, Brink of Disaster, End Of The Road, Day of Disaster, Desperate Intruder, 30 Minutes After Noon, The Impostors, The Man From MI.5, Cry Wolf, Danger At Ocean Deep, The Duchess Assignment, Attack of the Alligators!, The Cham-Cham, Atlantic Inferno, Path Of Destruction, Ricochet, and Give or Take a Million.

John appears in both feature-films, Thunderbirds Are Go and Thunderbird 6.

He also appears (via updated archival footage) in The Abominable Snowman, for Thunderbirds 1965.

John's "frowner" appeared in only 1 episode (The Duchess Assignment). 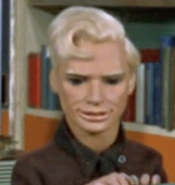 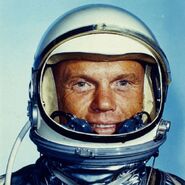 A rare picture of John smoking a cigarette (!)