You may be looking for his namesake from Brink of Disaster.

Joe is a character from Terror in New York City. He is a cameraman who works with Ned Cook.

Joe was sent with Ned Cook to cover the fire at the oil field. He took up position on top of the N.T.B.S's Van and started to film Thunderbird 1 as it was leaving the area.

Scott Tracy wiped the film after the Automatic Camera Detector alerted him that his departure was being filmed.

Vanishing down a hole

A long way to fall

Lucky to be alive 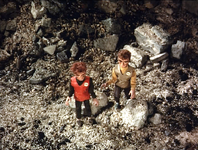 They watch helplessly as the building collapse

Breathing apparatus is passed down to the two men through a small hole in the cavern roof, but each has only two hours of air in the tanks so there is little margin for error. Sentinel arrives in New York harbour and Gordon sets off in Thunderbird 4 to find the inlet to the underground river. Scott tells Ned and Joe, now completely submerged to search for the river entrance from their end, but the nearby Fulmer Finance Building collapses, causing a tidal wave through the underground cavern. Ned and Joe manage to find the river entrance from the cavern, but their air has run out which causes Joe to nearly fall unconscious. This leads to Ned carrying him through the entrance. From Thunderbird 4, Gordon spots the men and rescue them just as the tidal wave hits. Thunderbird 4 is swept back into the harbour by powerful current. 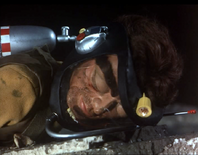 Joe struggles to go on 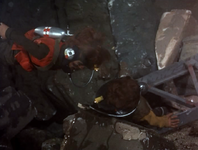 A helping hand from Ned 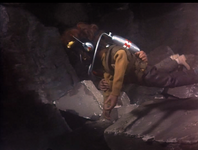 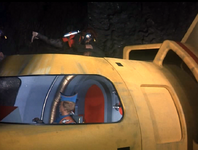