After Alan and Grandma Tracy were left stranded on San Miguel Bridge, with a bomb set to detonate, International Rescue were summoned for a rather personal rescue.

After the bomb's motion sensor had been neutralized, Alan and Grandma had to be evacuated before the bomb went off. This was achieved using the Transporter, which was positioned on the base of the bridge, underneath the platform they were trapped on. From there, it was safe for them to simply jump off, knowing full well that Virgil Tracy would be there below to catch them.[1] 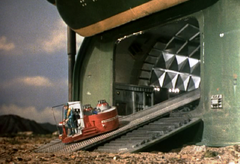 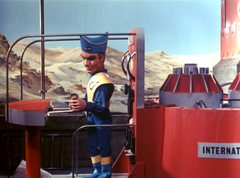 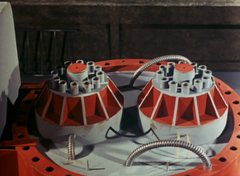 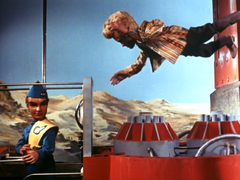 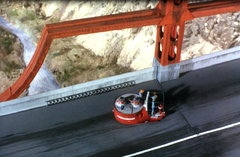 As far as is known, only one cutaway drawing of the Jet-Air Transporter exists. Illustrated by Graham Bleathman, it appeared in the Haynes Thunderbirds manual.