What's this? Has International Rescue expanded its active roster? Who's that chap in the cap?

Look closer. That unfamiliar face with the otherwise-familiar uniform belongs to a fellow named Jenkins, who is definitely not on the proverbial up-and-up...even if he is at what appears to be the scene of a rescue...

Turns out he's got good reason for fending off those photographers. In fact, as he and his cohort-in-chicanery Carela are soon to learn, there's a lot more to even pretending to be IR than just a uniform - and a fake one, at that...

Voiced by Ray Barrett, Jenkins appears in - and is one of - The Impostors. 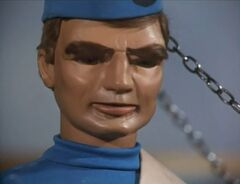 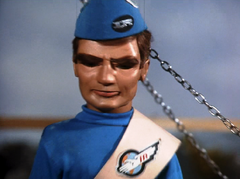 Clothes make the man? Not! 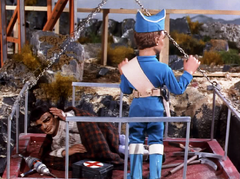 Jenkins and Carela have hatched a clever scheme to steal top-secret plans - and pin the blame on none other than International Rescue!

While the real IR is forced to suspend active operations as a worldwide search for their secret base is underway, Jenkins and Carela are calmly cooling their heels in an old mine as they await the arrival of the buyer for their ill-gotten gains.

But IR is far from idle: Jeff Tracy sends Lady Penelope (along with Parker) to the United States, to follow up a promising lead - and they indeed hit paydirt. Local IR field agent Jeremiah Tuttle has tracked down the crooks to the mine location; and, with some fancy sharp-shooting - and timely usage of his Ma's beans - Jenkins and Carela are flushed out into the open, and subsequently captured. 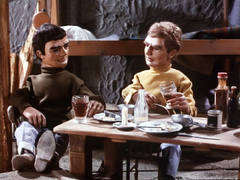 Hideout in an old mine 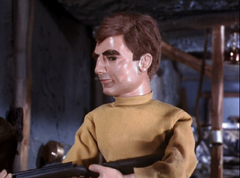 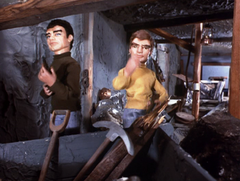 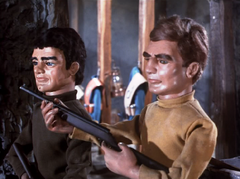 Jenkins appears to be left-handed 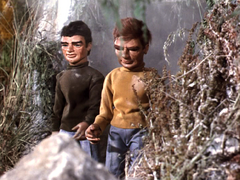 In End Of The Road

As the 2nd Site Control Policeman