"International Rescue was his gift to the world. Everyone in this room is keeping that gift alive. He would be so proud of each and every one of you!"
— Grandma Tracy

Colonel Jeff Tracy is a character from the Thunderbirds Are Go! television series.

He became a multi-billionaire as an astronaut, and took part in multiple outer space operations such as the construction of lunar bases like Shadow Alpha 1. He also became the first man to walk on the planet Mars. He is the father of the five Tracy brothers, and the man who created and led International Rescue, doing so after his retirement with the fortune he'd made.

Jeff’s signature colour for his iR uniform is grey.

After the Hood stole the Zero-X in the mid-2050s, its experimental faster-than-light engines malfunctioned and threatened to trigger a mass-extinction event. To avoid this, Jeff activated the engine's faster-than-light capabilities and launched himself into deep space - marooning himself there in the process.

During their journey to Mars, Alan confides in Virgil, telling him that their father has been absent from their lives for so long that, owing to his own young age, he has trouble remembering the small details of their father. Alan remarks further that these details are actually important characteristics of Jeff's personality.

Jeff and Captain Lee Taylor were the first two men to land on Mars. After many months' traveling to the planet, their descent through the atmosphere was almost aborted after a huge dust storm was consuming the planet. However, Jeff and Lee decided to take the risk and attempt a landing, with Jeff claiming "humanity never got anywhere by taking it easy!" After they were successful, Jeff took the first step on the planet's surface - making history - as they both began surveying the land, looking for possible signs of life. Jeff's first footprint was preserved by being encased with a glass dome placed over it, where it would remain for centuries to come. A few decades later, a Mars Colony base was built just next to Jeff's original landing site, for families to live in and to begin a new life, Captain Lee Taylor later returned to their original site to admire his friend's footprint and the landing they had first made history on, all those years before.

Sometime during the mid-2050s, Zero-X was stolen by the Hood, with the prototype ship's engines being driven into critical overload. Captain Casey became getting concerned about the possibility of an extinction- level explosion. However, Jeff was already aboard the Zero-X trying to stop the Hood from getting away. Jeff climbed across the top of the ship while in flight, and successfully entered the cockpit. Once aboard he encountered the Hood; after a brief confrontation the Hood made his getaway aboard an escape pod, leaving Jeff trapped aboard. Jeff bravely piloted the spacecraft towards deep space, but the engines hit critical and exploded - taking the ship with it. Jeff apparently perished with the ship.

However, additional archive footage obtained from the escape capsule revealed that the explosion was, in fact, an aftershock and that Jeff had successfully fired the T-drive engine onboard the Zero-X, which launched him into deep space at a faster-than-light speed. This discovery, paired with a mysterious distress signal coming from deep space, showed that the Zero-X travelled outside of the solar system to a hypothetical region called the Oort Cloud. At this point, it was presumed that Jeff was still onboard the Zero-X and was trapped at his current location, necessitating a second Zero-X to be built by International Rescue. Upon International Rescue arriving at the source of the distress signal, it was revealed that Jeff was living in the cannibalised remains of the original Zero-X after it had crashed inside a small planetoid.

Jeff takes control of the Zero-X

After the Zero-X launched into the Oort Cloud with Jeff still on board, it eventually crashed inside a planetoid. After escaping, Jeff utilized all the valuable skills he'd learned as an astronaut in order to cannibalize the wreckage of the ship's main body, supplies and control cabin, and created a make-shift home for himself.

Using everything he'd learned in his younger days, he was able to fashion a bed and rig up some lighting and an oxygen supply, along with an airlock. He also worked out a careful rationing for the ship's food supply, to make it last eight years.

To remind him of home, he sketched a picture of Tracy Island on the wall next to his bed.

Although he was missing in action, Jeff still held a massive presence on Tracy Island even if he wasn't there in person. He was greatly missed by the residents on the island, but was remembered fondly by all who knew him well. His desk acted as a shrine as a way of keeping his memory alive.

As the father of five young sons, it is apparent that he loved each and every one of them equally. According to his youngest son, Alan, Jeff insisted that all the kids on the island (including Kayo) learn Morse Code, which Alan thought was a massive waste of time - until he and Kayo found a use for it...

It's also assumed that Jeff loved his mother just as much as his sons. After his disappearance, Grandma became head of the family, while Scott took over as head of International Rescue. According to his second-youngest son, Gordon, Jeff always took Grandma's side when it came to her dreadful cooking; and that his desk acted as a safe haven for the boys. whenever Grandma tried to feed them her latest batch of cookies (!).

At some point in time, when his sons were still young, Jeff took into his care a young British girl named Tanusha Kyrano, who would later be nicknamed Kayo. While it's unknown as to whether Jeff officially adopted Kayo, he loved her as if she was his own daughter and took into his confidence, along with Grandma, Kayo's relationship with The Hood - which he requested be kept a secret from the boys, for fear that the news might be a distraction. He allowed Kayo to live on Tracy Island with him and the other members of his family.

Brains was a close friend of Jeff's. Due to the inventor's interest in machines, Jeff asked him to move to Tracy Island as a member of the family and employed him to construct the five Thunderbird ships and Lady Penelope's car FAB 1 for International Rescue's use. Sometime before or after Jeff disappeared, Brains also created Thunderbird Shadow for Kayo.

Jeff also had a close friendship with Kayo's father, Kyrano. According to Kayo, during a conversation she has with Alan, her father never got over Jeff's assumed demise and was presumably driven into retirement. She states that if Jeff is still alive, it would bring her dad out of retirement.

Lady Penelope and Parker are longtime friends of Jeff's. He asked them to join IR as special agents. According to Parker, he (Parker) taught Jeff to drive before going on to teach Jeff's five sons. However, it's unknown as to whether Parker actually did teach Jeff to drive; as he had to correct himself, saying he wasn't quite that old! As for flying, Grandma Tracy stated that she taught Jeff how to fly.

Colonel Casey was a friend of Jeff's, too. It's unknown as to what the nature of their relationship was, but it can be assumed that their friendship was nowhere near as close to Jeff's friendship with Lady Penelope and Parker - as Jeff kept the location of Tracy Island from her, and from the GDF. That notwithstanding, though, Casey respected Jeff's wishes, as she was as proud of his sons' heroic deeds as he was. However, when Brains and Kayo learn from Braman's message that Jeff could be alive, the question is raised whether Colonel Casey should be told. The question is quickly dropped, despite Colonel Casey practically being family.

Ring of Fire Part 1 revealed that Jeff was either dead or missing in action, due to The Hood's actions, with his ship having apparently sunk while he was looking for more information on the villain. An aquatic mission in Thunderbird 4 was briefly interrupted by the detection of the same type of transponder beacon (YT-88) Jeff had on his ship. Gordon Tracy quickly investigated where the signal was coming from, only to be disappointed to find that it was not from his father's ship.

In Slingshot, Alan told Kayo that Jeff insisted on teaching him and his brothers Morse code, even though the form of communication was phased out before the Global Conflict of 2040.

Relic saw Scott and Alan Tracy rescuing their father's old lunar crew mate Captain Lee Taylor, stranded on the Moon inside Shadow Alpha One. Taylor repeatedly spoke with Scott about his career alongside Jeff; and after being rescued and taken to Tracy Island, Taylor told the residents more stories about himself and Jeff.

Colony saw the return of Lee Taylor, and with it the revelation that Taylor and Jeff were the first two men on Mars, with Jeff's footprint having been preserved on the surface of the planet near the location that was subsequently chosen for the first Martian colony.

In Up from the Depths Part 1, a survey vehicle stalled at the bottom of the Mariana Trench, and discovered TV-21 - an International Rescue prototype vehicle, once flown by Jeff, before it was sabotaged by The Hood and presumed lost. According to Scott, the TV-21 was Jeff's baby, and losing it broke his father's heart.

In Volcano!, the concierge mockingly says he's Jeff Tracy after Brains and Virgil Tracy try to convince that the volcano will actually erupt this year.

In Life Signs, on their way to Mars in Thunderbird 3, Virgil reminds Alan of some of their memories of their father.

During SOS Part 1, it's revealed that Jeff trained the astronauts for a ten-year mission.

The climax of SOS Part 2 revealed that Jeff might still be alive, when an encoded message was detected nine billion miles away from Earth.

Signals Part 1 saw International Rescue mobilize to recover an escape pod from Zero-X - which might provide an alternate view of what happened to Jeff after the Zero-X exploded. The retrieval confirmed that Jeff was able to activate the Zero-X's engines, and its 'destruction' was actually the ship's FTL drive engaging in Earth's atmosphere, blasting off to a distant part of the Solar System called the Oort cloud, prompting the Tracys to begin work on a new ship, later named as the Zero-XL, to try and retrieve him.

In Break Out, Virgil is seen painting a portrait of someone who seems to be wearing an International Rescue uniform. Although unconfirmed, it's assumed that "someone" is his father. When the initial test of the new interstellar engine fails, Brains suggests that they contact the GDF to recruit the Mechanic's insight due to his experience with such technology - leading to them telling Colonel Casey about Jeff's continued survival.

In The Long Reach Part 1, Jeff briefly appears at the end of the episode, when he saves his son Scott from falling off the asteroid that he was marooned and living in for 8 years.

In The Long Reach Part 2, after Scott brings his father Jeff to Thunderbird 2, Jeff reunites with his other sons. When the Tracy brothers bring Jeff to the Zero-XL, he works out Brains, was actually a disguised Hood and the real Brains was locked in a storage container by The Hood. After returing to Tracy Island, Jeff reunites with his Mother Sally, Kayo, Lady Penelope and Parker. After Alan's high school graduation, Jeff returns to his desk as the commander-in-chief of International Rescue when a distress call comes through. 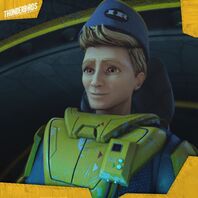 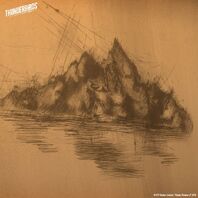